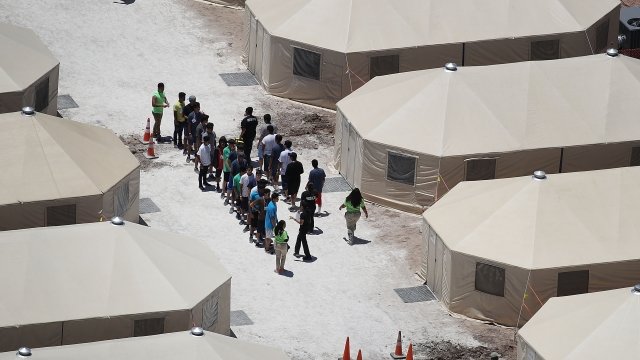 By Caitlin Baldwin
November 28, 2018
A memo released by the Department of Health and Human Services says forgoing the FBI checks could compromise the safety of the children at the site.
SHOW TRANSCRIPT

Staff at a migrant detention camp in Texas were not forced to undergo FBI fingerprint checks, possibly putting migrant children at risk.

A memo released by the Department of Health and Human Services inspector general says required FBI background checks have not been conducted on staff at the influx care facility in Tornillo, Texas, since September. That facility houses around 1,800 unaccompanied teens.

The memo says that, "Instead, Tornillo is using checks conducted by a private contractor that has access to less comprehensive data."

The office also found that there are not enough staff clinicians employed at the Tornillo facility to provide mental health care to the children.

The memo says the site needs to address the two issues immediately "because they pose substantial risks to children receiving care at this facility."

The Tornillo facility has already begun completing the required FBI background checks, and the inspector general's office is expected to follow up with the site.