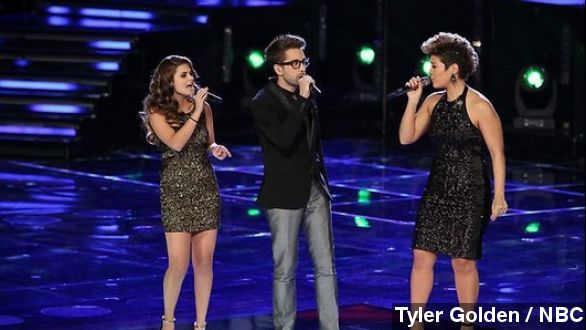 Chin's big win wasn't exactly a surprise. Critics loved her, and on the final night of performances, she delivered a much-praised rendition of "I Have Nothing" by Whitney Houston.

"The Team Adam beauty quickly became a fan favorite in the early stages of this season's completion and her consistently awe-inspiring performances have made her a force to be reckoned with." (Via E!)

But her win isn't the only much-talked-about moment from Tuesday night's finale. Celine Dion appeared, and sang a duet with Chin. (Via Hollywood Life)

And Lady Gaga and Christina Aguilera met for the first time, held hands, dueted, cuddled and glittered in gold. (Via Just Jared)

Aguilera has yet to have a winning contestant on the show. But, there's always next season.