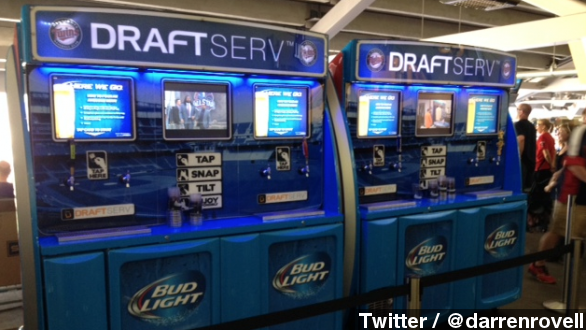 By Erik Shute
July 7, 2014
Minnesota's Target Field will open self-serving beer stations at this year’s MLB All-Star Game. Fans can pour their own beer and pay by the ounce.
SHOW TRANSCRIPT

​Anheuser-Busch has started up the next innovation in beer-automation at Minnesota’s Target Field.

The Twins’ home game against the Yankees Sunday debuted these self-serving beer stations. ESPN reporter Darren Rovell caught a glimpse of these blue game-changers from DraftServ.  He spoke with investors behind the idea who said, (Via Twitter /  @darrenrovell)

“It’s a way to engage with the customer and allows the fan to have greater control of what they’re drinking. There’s obviously some novelty value to this, but it also allows people to pour what they want.  If they want half of a cup, that’s all they will pay for.” (Via ESPN)

And fans will funnel 38 to 40 cents per ounce of beer.  The DraftServ will house Budweiser and Bud Light.  Premium beers, including Shock Top Lemon Shandy and Goose Island 312, will cost two cents more than the domestics. (Via Flickr / Quinn Dombrowski)

“So it works like this you basically get a debit card that you charge up -- once you prove you’re of legal drinking age -- and you run it and you can tap it and you can buy beer by the ounce.” (Via KMSP)

Those debit cards will come in $10, $20, and $50 increments.  The other catch: fans pouring back cold ones will only be able to tap 48 ounces of beer every 15 minutes — which we do not recommend trying anyway. (Via Facebook / DraftServ)

So is this a revolutionary idea or an impending free-for-all? Mixed reactions from fans and media made it onto the web.

SB Nation noted the final cost is "stunningly fair", coming in at $6-$7 per pint. It also wondered if brave fans will mix new concoctions from the bevy of taps.

History might also warn that more beer at ball games can have adverse effects.

Major League Baseball suffered a terrible string of incidents during “Ten Cent Beer Night” promotions in the 1970, in which high consumption of alcohol was blamed for multiple riots that broke out at the games. (Via Cleveland.com)

The StarTribune in Minneapolis reports Target Field will have the self-serve stations up and running for the All-Star Game July 15.