Helping Refugee Kids Assimilate One Thanksgiving Dinner At A Time 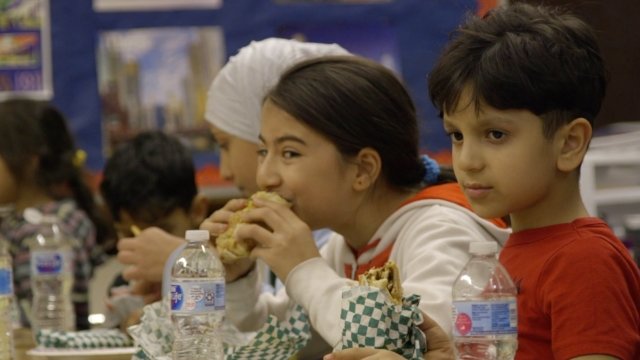 By Ben Schamisso
November 21, 2018
A community of Syrian refugees in Chicago is making sure its youngest members have the best experience possible assimilating to the U.S.
SHOW TRANSCRIPT

In the spirit of Thanksgiving, these young Syrian refugees in Chicago are sharing a meal and reflecting on what they are thankful for.

But besides the Thanksgiving activities, this is a pretty usual evening for the children. The Syrian Community network, a local nonprofit, puts together this after-school program a few times a week.

The kids have all resettled from Syria to Chicago with their families within the last couple years — fleeing the country's ongoing civil war. That seven-year war has killed hundreds of thousands and displaced nearly 13 million people.

At the peak of the resettlement program in 2016, the U.S. accepted more than 15,000 Syrian refugees. That number dropped to 3,000 in 2017 and so far in 2018, only 37 Syrian refugees have entered the country. That's in line with President Donald Trump's efforts to scale back refugee programs in the name of national security. Syria is also one of seven countries included in the U.S.' controversial travel ban.

As a result, the Syrian Community Network has shifted its focus away from welcoming refugees and toward empowering the already-established community.

"To have students next to you that share some of the challenges in terms of what it means to translate constantly and kind of learn through the lens of being a Syrian student in Chicago, I think that friendship and that connection is really, really powerful in learning as well," said the program's leader, Emily Kane.

Kane sets up different stations where small groups of children get to practice different skills.

"We do a lot of homework support. We do some English practice. So we might do some phonics activities and math activities. But it's also a space for students to really be able to have a community and friends that are from different schools — a space to kind of explore some of those social, emotional themes that are so important for our students to really process," she said.

She added: "We have a lot of students that are behind in their academics. And so there can be a lot of frustration — there can be lack of self-confidence when you hear over and over and over that you're struggling, or that you don't get the grade that you want. And so one of the things I'm really excited to share with the students is to just take a deep breath and to be able to sit and just enjoy food together."