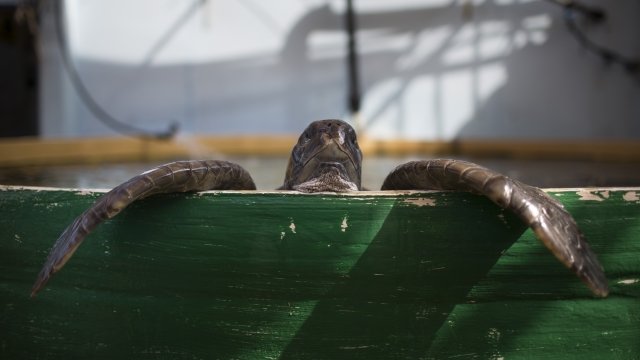 SMS
Study Says Even Single Piece Of Plastic Enough To Kill Sea Turtles
By Ahmed Jawadi
By Ahmed Jawadi
September 14, 2018
​It's estimated more than half of all sea turtles have eaten some form of plastic debris during their lifetimes.
SHOW TRANSCRIPT

An estimated eight million metric tons of plastic enter the oceans each year, and even a single piece can be enough to kill a sea turtle.

According to a study published Thursday, it's estimated more than half of all sea turtles have eaten some form of plastic debris during their lifetime, due to the plastic resembling their food. Researchers analyzed nearly 1,000 dead sea turtles and were able to find a link between how much plastic a turtle ingests and its probability of death.

They found that, of the turtles that ate just a single piece of plastic, 20 percent were killed by it. Of those that ate 14 pieces, half died from the plastic, and 200 pieces appears to be fatal 100 percent of the time. The team also found younger turtles had a higher risk of death from eating plastic debris, as they typically ate more of it due to being less finicky in their diets than adults.

The turtles' causes of death were usually due to complications from plastic pieces getting stuck in their guts, which can block their digestive tracts and rupture their insides. It was previously unclear whether the plastic was actually killing sea turtles or if it was merely a coincidence.

Of the seven species of sea turtle, six are considered threatened today.