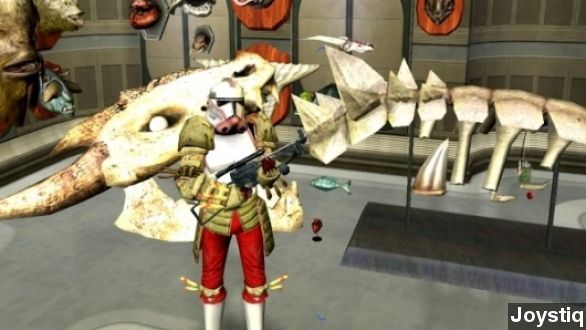 By Nathan Byrne
November 20, 2013
Disney and Electronic Arts have inked a 10-year deal to keep the franchises separate, but the marketing machine's movement continues.
SHOW TRANSCRIPT

The force is strong with this one. A 10-year deal between Disney's Lucasfilm and Electronic Arts will keep Star Wars movies and video games separate.

So, the "Star Wars: Battlefront" game and the "Star Wars VII" movie will both come out in 2015. But one won't be based on the other. And that separate coexistence will continue. (Via YouTube / EA )

Variety explains why we won't see movie-based video games coming out of the Star Wars universe for the next decade. "In the past, studios have licensed their films to video game publishers, seeing the titles as a quick way to generate revenue. In most cases, the films failed to excite buyers and didn't offer anything new, eventually hurting sales."

The Escapist adds: "It's an established fact that the secret to making a great Star Wars game is to steer well clear of the movies."

Fans of Star Wars video games have been wondering what the Disney-dominated universe might end up looking like. In April, Disney shut down the LucasArts gaming division.

"So the last game that they made, I think, was 'Star Wars Kinect.' And that involved a dancing Emperor. ... Maybe dancing Emperor is what killed LucasArts." (Via GameSpot)

Entertainment Weekly recently reviewed the year following Disney's acquisition of Lucasfilm and said "Star Wars VII" "sits at the uneasy nexus of corporate ambitions: It's the first step in a larger plan to revitalize one of the most popular franchise[s] in the last half-century of fictional media, with an earnings potential of several billion dollars at stake."

And what was Disney's first post-acquisition Star Wars game? The 8-bit-tastic "Tiny Death Star" — a free, mobile offering released earlier this month. Ironically, its theme is — making money to build the Death Star. (Via Joystiq)

We'll see some Lego-fied Star Wars characters appearing in February's "The LEGO Movie" — alongside the likes of Batman. How's that for crossover? (Via Warner Bros. / The LEGO Movie)