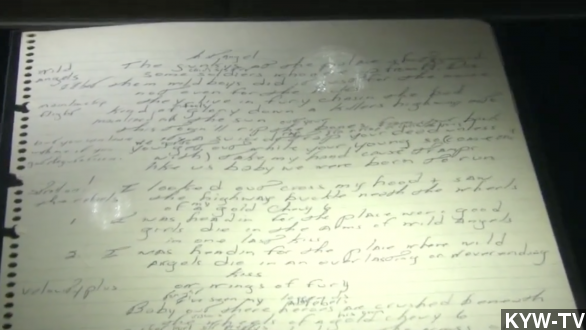 SMS
Springsteen Lyric Sheet Sells For Nearly $200K At Auction
By Collin Ruane
By Collin Ruane
December 6, 2013
A handwritten sheet of the original lyrics to Springsteen&#039;s hit song &quot;Born to Run.&quot; It sold at Sotheby&#039;s Thursday for $197,000.
SHOW TRANSCRIPT

A handwritten sheet of original lyrics for Bruce Springsteen's '70s hit "Born to Run" was sold at auction at Sotheby's in New York Thursday.

The highest bidder bought the expensive sheet of notebook paper over the phone for a whopping $197,000. (Via MSNBC)

KYW-TV notes what's interesting about the sheet sold Thursday is most of the lines in the piece didn't end up going into the popular song.

WABC adds Springsteen's former manager used to have the handwritten manuscript in his collection before it went to the seller, but Sotheby's didn't say who decided to sell the piece of The Boss' work.

Sotheby's also would not to reveal the name of the person who bought it. According to the New York Daily News, Springsteen spent nearly six months working on the song's lyrics. (Via WTXF)

Springsteen, himself, has a new album expected to be released next month.