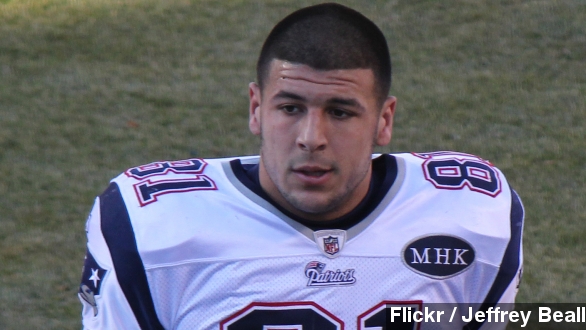 By Matt Moreno
May 28, 2014
Hernandez pleaded not guilty to charges related to the shooting deaths of Daniel de Abreu and Safiro Furtado in July 2012.
SHOW TRANSCRIPT

Prosecutors at Aaron Hernandez's arraignment Wednesday said they believe paranoia and a spilled drink at a night club led the former NFL tight end to shoot and kill two men in Boston in 2012.

Hernandez was in court Wednesday to be arraigned on murder charges in relation to the drive-by shooting deaths of Daniel de Abreu and Safiro Furtado. Hernandez pleaded not guilty. (Via Fox Sports)

Prosecutors say Hernandez had become increasingly paranoid about people disrespecting him in area night clubs. That's when this supposedly happened.

"We hear that ​de Abreu apparently bumped into Hernandez near the dance floor and knocked some of his drink over. De Abreu smiled, didn't apologize. That's when Hernandez left the club." (Via WHDH)

"Then he basically went after them and allegedly shot them dead ... simply over a spilled drink."

"Absolutely chilling, Maria, if true and if proven." (Via WFXT)

And, according to the prosecution, de Abreu had no idea Hernandez was angry with him.

Hernandez is also awaiting a separate trial in the shooting death of semi-pro football player Odin Lloyd. That happened in June 2013. Investigators say a possible motive for that killing is that Lloyd might have known about Hernandez's drive-by shooting. (Via ABC, WPRI)

Hernandez is next due in court for the double homicide trial on June 24.