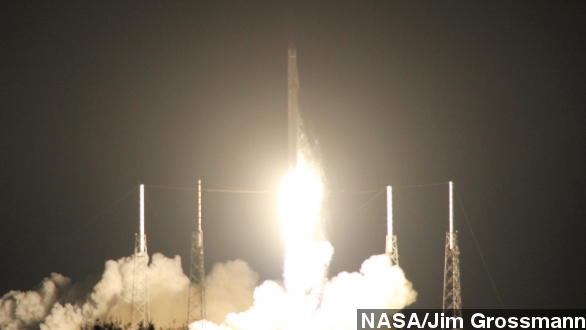 By Evan Thomas
January 10, 2015
The Falcon 9’s first shot at a live landing was only partially successful. The rocket crashed into its landing pad.
SHOW TRANSCRIPT

What goes up must come down. But when the “coming down” part involves landing a rocket balanced on its own exhaust, it can be harder than it looks.

SpaceX’s latest Falcon rocket blasted off from a NASA launchpad at Cape Canaveral in Florida Saturday morning. It marked the company’s first live attempt at launching and subsequently landing a first stage for reuse.

The flight’s primary goal was to get supplies to the International Space Station, and so far that bit of the mission is proceeding flawlessly. (Video via NASA)

NASA reports the second stage separated in low earth orbit and is on its way. Dragon’s docking with the ISS is expected on Monday.

A bit too enthusiastically, it turns out. It was dark and foggy at the time, so there isn’t clear video of what happened, but SpaceX reports Falcon “landed hard.”

CEO Elon Musk explained SpaceX will be piecing the failed landing together “from telemetry and ... actual pieces.”

Not rocket pieces, though. Musk reported Falcon was in good shape and that some of the equipment on the pad will need replacement, instead.

And even though it’s rocket science, this really could be just a matter of hammering out the dents and trying again.

SpaceX knows the technology works. Test flights in April and May of 2014 showed Falcon 9 can stick landings from more than 3,000 feet. The company acknowledges doing the same thing from orbit is a bit tougher.

On its blog SpaceX said it had expected a 50 percent chance of a successful landing. That Falcon made contact at all is, apparently, progress.

Once the technology gets working, though, everyone in the spaceflight business stands to benefit. Reusable rockets will make for huge savings over the disposable model, which CNN likens to “throwing away a Boeing 747 passenger jet after it makes one transatlantic flight.”

SpaceX’s next ISS supply mission is tentatively scheduled for February. The company hasn’t indicated whether it will try for another Falcon landing.