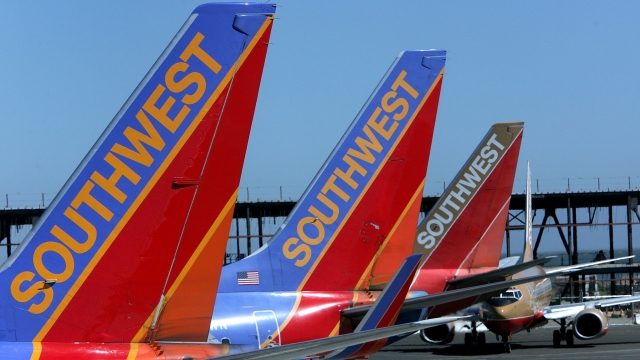 SMS
Southwest Airlines Extends Boeing 737 Max Cancellations To March 2020
By Alec Larson
By Alec Larson
November 8, 2019
​Southwest said "uncertainty around the timing of MAX return to service" was a big factor in its decision.
SHOW TRANSCRIPT

Southwest Airlines is extending its Boeing 737 Max cancellations until March 2020. That would nearly mark the first anniversary of the fatal Ethiopian Airlines crash that led to the 737 Max's worldwide grounding.

Southwest had previously canceled all of its 737 Max flights until Feb. 8. The airline is the largest Boeing 737 Max customer in the U.S. and had 34 of the aircraft in its fleet when the plane was grounded.

Southwest said "continued uncertainty around the timing of MAX['s] return to service" was a large part of its decision to extend cancellations by another month.

Southwest CEO Gary Kelly suggested late last month the airline is looking into whether it should end its single-jet policy, which makes Boeing the airline's sole plane provider. He said: "Where we go from here is a question that we will address next year, as to whether or not the strategy we have deployed for 48 years is the one that we want for the next 48 years."

Not long after Southwest made its announcement, American Airlines followed suit and extended its 737 Max cancellations until March 5.