Sorting Out The Mixed Signals On The FBI's Kavanaugh Probe 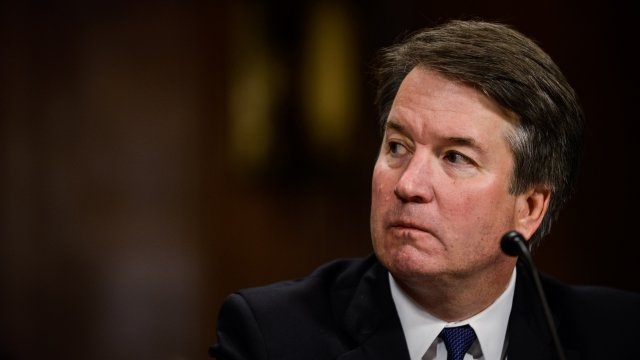 SMS
Sorting Out The Mixed Signals On The FBI's Kavanaugh Probe

By James Packard
October 4, 2018
President Trump tweeted that he wanted the FBI to interview whoever it deemed necessary. But his White House skirted questions on FBI limitations.
SHOW TRANSCRIPT

If you felt confused this past week about just what the FBI was investigating regarding Brett Kavanaugh, you probably weren't alone. There was a lot of conflicting information out there, and one presidential tweet in particular didn't help.

We're going to try to sort things out. We'll look at both what the FBI had been told to investigate and when the White House requested it.

First, Friday night: The White House told the FBI to look into allegations that Brett Kavanaugh committed sexual assault as a teen. It wanted the probe to be "limited in scope and completed in less than one week." It was never really clear what "limited in scope" meant there.

Saturday night, the president tweeted a denouncement of this NBC News report saying the White House had limited the FBI's probe into the accusations against Kavanaugh.

The president claimed he wanted the FBI to interview whoever it deemed appropriate. He said NBC's report was incorrect.

Then, The New York Times reported Saturday night that the FBI would talk to just four witnesses. That report came just after the president's tweet.

According to multiple reports, it wasn't until later that the White House told the FBI it should interview whoever it saw fit. The president said Monday that he made that request over the weekend.

Even once the White House talked about letting the FBI interview who it wanted, it qualified its update by saying the FBI still had to wrap up the investigation in a week and had to adhere to Senate Republicans' wishes.

That second caveat is key, because it's how the White House kept skirting questions about the investigation's scope. That brings us to our second point.

The White House kept deferring to the Senate on what the FBI should investigate. As late as Wednesday, the White House would not clarify what parameters, if any, it had put on the FBI, saying only that it wanted what Senators wanted.

"Bloomberg is reporting right now that the FBI hasn't interviewed Judge Kavanaugh or Dr. Ford, because the White House hasn't given the FBI clear authority to do so," Fox Business Network's Blake Burman said to Sarah Sanders. "Is that indeed the case?"

"As we've said several times, the president's indicated that whoever the FBI deems necessary to interview, he's fine with that, but he's also asked that the Senate be the ones that determine the scope of what they need in order to make a decision on whether they vote Kavanaugh up or down," Sanders responded.

So, even if the president said the FBI should do what it wants, that doesn't mean that's what he actually told the bureau to do. His tweet Saturday night suggested he'd officially ordered the FBI to interview whoever. Plenty of reports refute that, and the White House kept deferring to Senate Republicans on the scope of the probe.