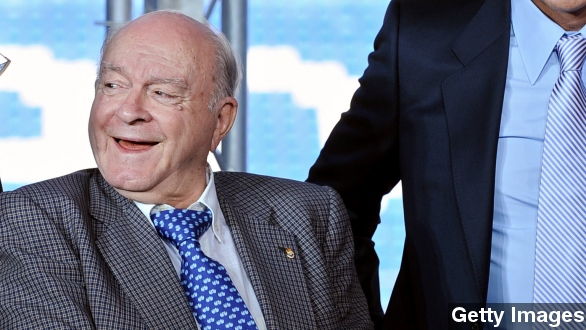 By Sebastian Martinez
July 7, 2014
Real Madrid legend and soccer great Alfredo Di Stefano has died of a heart attack at the age of 88.
SHOW TRANSCRIPT

Alfredo Di Stefano, one of the greatest soccer players of all time, died Monday of a heart attack at the age of 88. (Via Getty Images)

​​Di Stefano is best known for the decade he spent at Real Madrid between 1953 and 1964, during which he led the team to eight league titles and an unprecedented five consecutive European Cups. (Via Wikimedia Commons / Brgesto)

Many players, from Brazilian legend Pele to the controversial Luis Suarez have cited Di Stefano as a player they looked up to, and the respect he commanded is evident in how media outlets are reacting to his death. (Via CNN, Univision)

Le Monde, The Guardian and the BBC ran similar headlines, praising Di Stefano as soccer's most influential player ever.

If you're a recent convert to the sport, unlike Pele or Maradona, it's possible you've never heard of Di Stefano before. There are a couple reasons for that.

Despite all of his success at the club level, Di Stefano never played in a World Cup. His home country of Argentina refused to participate in the 1950 and '54 tournaments, and his adopted country of Spain didn't qualify in '62. (Via ESPN)

Another reason, as the Independent points out, "his career obviously spent decades before the generation of ubiquitous YouTube highlight footballers, there is little video of his impressive career."

Nevertheless, he is widely considered the first global soccer superstar, paving the way for current greats Lionel Messi and Cristiano Ronaldo, who both paid their respects on social media. (Via Marca, Twitter, Facebook)

Di Stefano had a few health scares before suffering a heart attack on Saturday and being put into a medically-induced coma. He is survived by his six children.