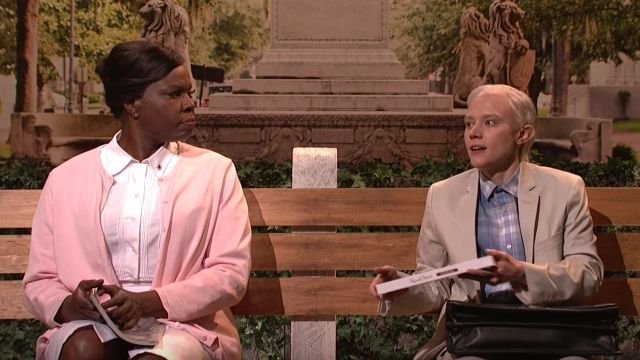 "Saturday Night Live" has used just about every opportunity to make fun of President Donald Trump and his administration, and this week was no exception. This time the major focus wasn't Trump or press secretary Sean Spicer, but Attorney General Jeff Sessions.

In a "Forrest Gump"-inspired sketch, Kate McKinnon's Sessions sits at a bus stop making conversation with strangers. Unsurprisingly, topics include the heat he's under for not disclosing his conversations with a Russian ambassador and the letter Coretta Scott King wrote in the 1980s arguing he should not be made a federal judge.

And, of course, there's reference to the iconic "box of chocolates" line — you know the one:

But the "SNL" version is a joke about long-standing allegations of Sessions being racist (see the Coretta Scott King letter). McKinnon's Sessions says: "I always say life is like a box of chocolates. Sure are a whole lot of brown ones in there."