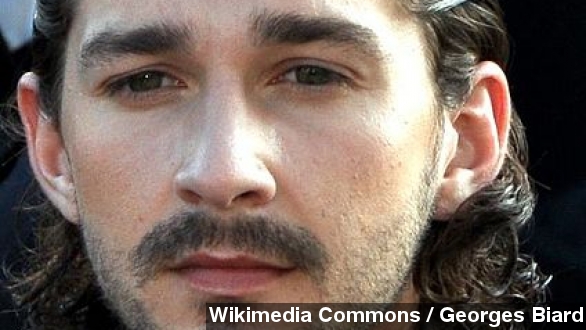 By Jasmine Bailey
February 9, 2014
In Berlin Saturday, Shia LaBeouf walked out of a press conference after one question then wore a paper bag over his face on the red carpet.
SHOW TRANSCRIPT

Shia LaBeouf seems to really be trying hard to stir up controversy.

One question into the press conference he gets up and walks out after quoting French actor and ex footballer Eric Cantona who said this before also walking out of a press conference in 1995. (Via The Independent)

“When the seagulls follow the trawler, it’s because they think sardines will be thrown into the sea. Thank you very much.” (Via BBC)

Then there's his fashion statement on the red carpet.

Yeah, a brown paper bag. Anyone know what he's trying to get across — not obvious enough? (Via Just Jared)

How about now? The same tweet over and over again with the message that was written on the paper bag, "I am not famous anymore." (Via Twitter / @thecampaignbook)

Wooh, talk about persistence. This comes not long after accusations against Shia for plagiarism. (Via Ascot Elite Entertainment / "Charlie Countryman")

So what's with all the weirdness? Could it all just be an act — performance art?

Well, Time quotes a tweet from the 27-year-old that has reportedly since been taken down. "My twitter... is metamodernist performance art. All art is either plagarisum [sic] or revolution & to be revolutionary in art today, is to be reactionary. In the midst of being embroiled in acts of intended plagiarism, the world caught me & I reacted. The show began. I became completely absorbed..."

Around the same time as that tweet, Shia said he was "retiring from all public life." Okay.