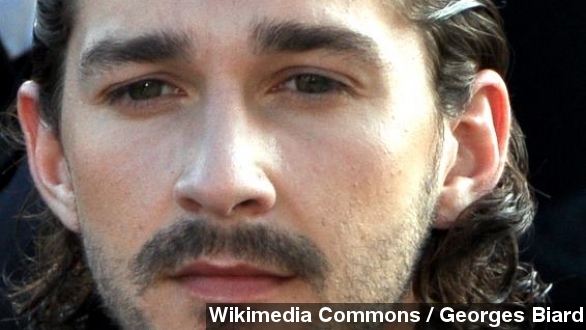 By Briana Koeneman
January 17, 2014
Looks like Shia LaBeouf can't stay out of the spotlight. He was caught on camera head-butting a man in a London pub Thursday.
SHOW TRANSCRIPT

To the surprise of no one, Shia LaBeouf has gotten himself into trouble again.

Despite announcing via Twitter last week that he was "retiring from all public life," the 27-year-old actor was caught on camera head-butting a man at a pub in London Thursday night. (Via Twitter / @thecampaignbook, CBS / "Late Show With David Letterman")

TMZ has the video.

Ouch! The audio is pretty unintelligible, but the New York Daily News reports, before the head-butt, an angry LaBeouf shouted, "What’d you say about my girl’s mom? Are you f-----g kidding me bro?”

It's unclear what the man said to deserve LaBeouf's head-on attack.

But E! notes, right after he was pulled away, one of the two women LaBeouf was with reportedly said to the man, "Don't be sarcastic with us again. Don't even play smart."

LaBeouf did apologize after the scuffle in yet another video taken by TMZ.

"I'm not trying to have, like, any more problems. Like, I'm really just trying to make peace." ​(Via TMZ)

Clearly. This isn't the only bar fight LaBeouf has gotten into over the years. He actually got into a brawl at the very same pub back in 2012. (Via Daily Mail)

And in 2011, he reportedly found himself at the center of a scuffle outside a Vancouver bar. (Via People)