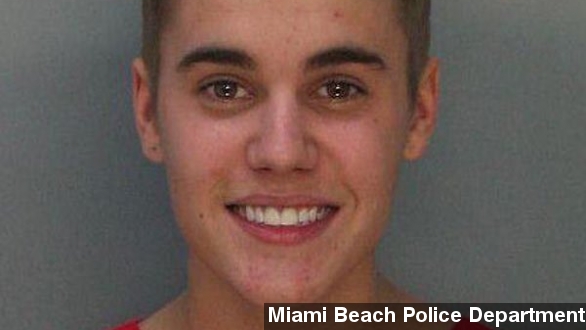 By Briana Koeneman
February 7, 2014
The L.A. County Sheriff's Department has recommended Justin Bieber be charged with a felony for egging his neighbor's house in January.
SHOW TRANSCRIPT

Looks like Justin Bieber could be adding "felon" to his rap sheet sometime soon.

CNN notes if Bieber is charged with a felony, he would have to appear in court. Bieber's lawyer could handle a misdemeanor charge without him there.

Thursday, authorities presented the evidence gathered during a Jan. 14 raid of Bieber's home to prosecutors. They told the New York Daily News they dismantled the surveillance system and took it with them.

Police busted Bieber's pal Lil Za during the raid. E! reported he was arrested on suspicion of felony drug possession and taken away in handcuffs.

TMZ posted footage of the alleged egg-throwing incident with the neighbor.

"I got another for you, actually!"

And just a couple of weeks after the egging incident, Bieber's legal troubles got even worse. He made headlines after getting arrested for DUI and other misdemeanor charges in Miami Beach. (Via The Hollywood Reporter)

Only days later, he turned himself into Toronto police in connection with allegged assault on a limo driver. (Via BBC)

Then, last week, several news outlets reported Bieber's private jet was detained at an airport after the crew complained the singer and his entourage were smoking weed on board and harassing the flight attendant. (Via Idolator)

The district attorney will reportedly decide what to do with Bieber's egging case in about a week.