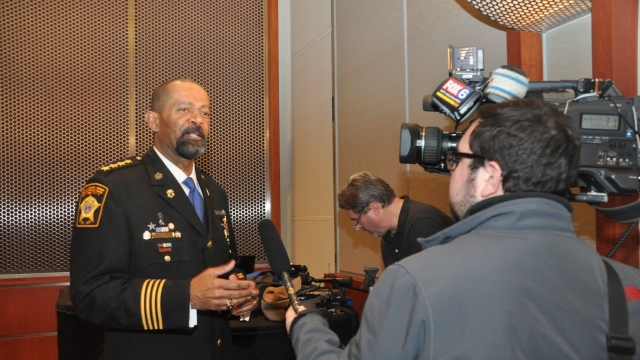 "I've been watching this for two years. I've predicted this. This anti-police rhetoric sweeping the country has turned out some hateful things inside of people that are now playing themselves out on the American police officer," Milwaukee County Sheriff David Clarke said.

"Just, please, if you will just please. If we can keep it civil — the message to people at home is one of civility," Lemon said.

"Don, I wish you had that message of civility toward this hateful ideology, purveyors of hate," Clarke said.

"You don't know what my message is. Are you going to let me get a word in? We'll be right back," Lemon said.

Clarke claims the Black Lives Matter movement has spurred violence against men and women in uniform.

It's a claim he reiterated in an op-ed piece The Hill published Monday. The sheriff wrote in part, "It's time to reclaim our future, and it begins by condemning Black Lives Matter, organizers and inspiration for hate, friend to enemies of law and order."

Leaders of the Black Lives Matter movement have repeatedly called for an end to violence.

Clarke is no stranger to the interview circuit — he's weighed in on various officer-involved shootings and often appears on Fox News.

Clarke has been the Milwaukee County sheriff since 2002 and before that served for the Milwaukee Police Department for more than two decades.

He’s expected to speak at the Republican National Convention on Monday night.