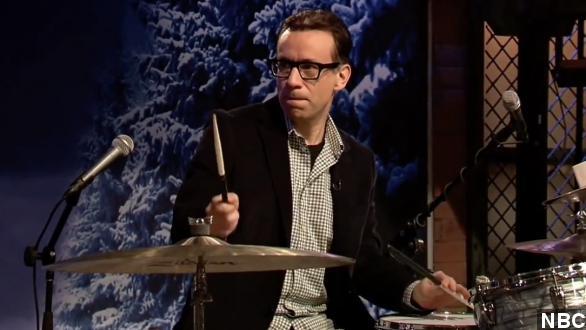 By Danny Matteson
February 10, 2014
In a tweet Monday the show announced, “*drum roll please* Beyond excited to announce Fred Armisen will be joining #LNSM as @SethMeyers’ band leader!”
SHOW TRANSCRIPT

It’s a late night reunion of sorts, as Seth Meyers has named former “Saturday Night Live” co-star Fred Armisen as the bandleader on his new show.

In a tweet Monday the show announced, “*drum roll please* Beyond excited to announce Fred Armisen will be joining #LNSM as @SethMeyers’ band leader!”

Meyers and Armisen worked together on “SNL” through much of the 2000s before Armisen left the show in 2013 and Meyers departed earlier in February. (Via NBC)

Armisen will reportedly “lead and curate” the band, known as the “8G Band.” (Via Twitter / @sethmeyers)

As USA Today notes Armisen does have a musical background. Armisen “played drums for a high-school band and began his career in 1988 as a drummer for punk band Trenchmouth in Chicago.”

Armisen will also split time between Meyers’ show and the IFC show “Portlandia” — of which he is a co-star. It’s set to premiere its fourth season later this month.