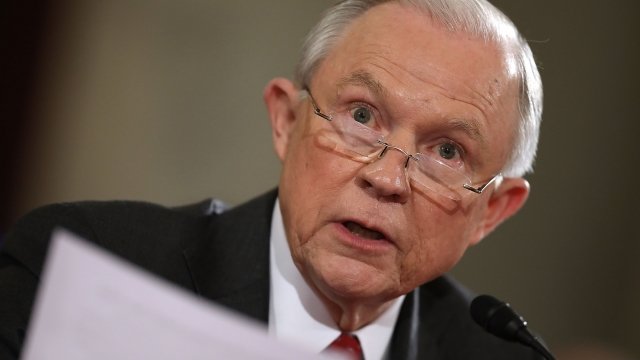 By Cristina Mutchler
September 10, 2018
Attorney General Jeff Sessions told an incoming class of immigration judges that their job is to "apply the law, even in tough cases."
SHOW TRANSCRIPT

In a speech to the largest class of immigration judges in history, Attorney General Jeff Sessions defended the U.S. enforcement system.

"Well, let me say this clearly: It is perfectly legitimate, moral and decent for a nation to have a legal system of immigration and to enforce the system that it lawfully adopts," he said.

The "zero-tolerance policy," meant to prosecute 100 percent of illegal border crossings, came under scrutiny earlier this year for a practice of separating more undocumented children from their guardians at the U.S.-Mexico border. President Donald Trump has since signed an order that allows migrant families to be detained together in certain cases.

In his remarks, Sessions also referenced the asylum process, which allows people to enter the U.S. for protection if they meet specific requirements. He says that system has been "abused," with asylum claims going up substantially since 2009.

The new class of 44 immigration judges sworn in Monday are needed for a higher caseload, Sessions said. The DOJ also plans to add even more judicial officers by the end of the year, putting it close to a goal of a 50 percent increase in immigration judges since President Donald Trump took office.