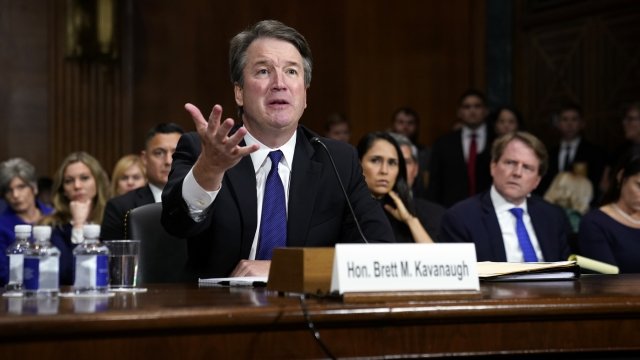 A day after he testified before the Senate Judiciary Committee about sexual assault allegations against him, Judge Brett Kavanaugh is now a step closer to the Supreme Court. But it didn't come without a whole lot of drama.

On Friday, the panel was expected to vote along party lines to recommend Kavanaugh for approval in the full Senate. Minutes before the vote took place, Republican Senator Jeff Flake announced that while he will approve Kavanaugh out of committee, he was not comfortable for a full Senate vote without another FBI investigation.The committee still voted along party lines, with all 10 Democrats opposing Kavanaugh.

Following a contentious confirmation hearing in early September, Christine Blasey Ford, Deborah Ramirez and Julie Swetnick all publicly accused Kavanaugh of sexual misconduct when he was either in high school or college — though Swetnick did not accuse him of assaulting her personally.

Ford testified before the panel Thursday and told lawmakers she's "100 percent" certain Kavanaugh is the one who sexually assaulted her decades ago...accusations Kavanaugh forcefully denied.

President Donald Trump nominated Kavanaugh to succeed Anthony Kennedy, who retired from the bench at the end of July.

When it comes to the full Senate, Kavanaugh needs only a simple majority to get confirmed.

Due to the 51-49 split in the Senate favoring Republicans, the GOP will need to have a nearly unanimous vote, or persuade a few Democrats over to their side. As of Friday, no Democrats have said they'll vote for Kavanaugh. In the case of a 50-50 split, Vice President Mike Pence would cast the tie-breaking vote.