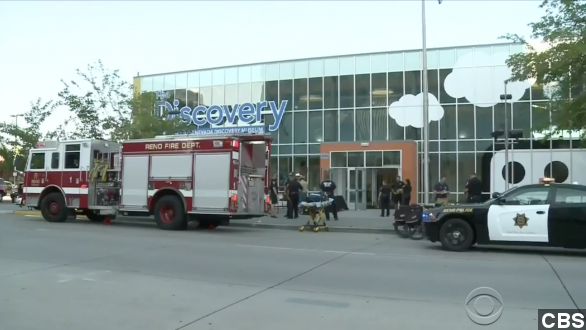 By Sebastian Martinez
September 4, 2014
A science demonstration at a Nevada museum reportedly left 13 people injured, including eight children who had to be taken to the hospital.
SHOW TRANSCRIPT

Thirteen people were injured and nine others were taken to the hospital after a science demonstration at a museum in Reno, Nevada, Wednesday apparently did not go as planned.

It's not clear exactly what happened, but what is known is that it happened at the Terry Lee Wells Nevada Discovery Museum, the people who were injured suffered burns, and some of them were children. (Video via CBS)

And The Reno Gazette-Journal reports eight of the nine people taken to the hospital were children. The outlet cites officials who say a chemical mixture caught fire, causing burns and smoke inhalation.

After the accident, the museum tweeted: "preliminary reports of an explosion at the museum are inaccurate. A routine science demonstration didn't happen as usual causing a flash."

But that didn't stop a number of outlets from reporting the incident like this:

WSYX: "The group was watching a smoke tornado simulation when an explosion happened."

WOI-TV: "Eight children and one adult are being treated for flash burns after an explosion at a museum yesterday in Nevada."

ABC: "Nightmare at the museum, more than a dozen people hurt in an explosion at a children's museum in Reno."

But for what it's worth, at least one account conflicted with the museum's tweet, with a witness telling local TV station KOLO, "The one tornado wasn't going, no one really thought anything of it and then she was like, I forgot to add this and added it, then everything exploded."

The fire tornado is a well known science demonstration that usually involves a mesh cylinder placed around the source of a fire on top of a spinning surface. It creates a tornado-like effect. (Video via About.com)