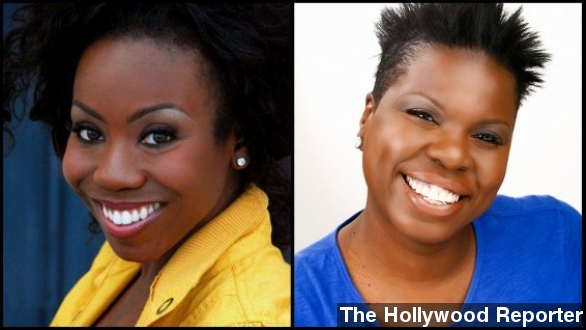 After months of controversy over its cast's lack of diversity, "Saturday Night Live" recently added its first black female cast member since 2007. Now it appears the sketch comedy show is diversifying behind the scenes, as well.

According to an exclusive report from The Hollywood Reporter, the show has added two female African-American writers to its staff.

They're LaKendra Tookes and Leslie Jones, two comedians discovered during the not-so-secret tryouts in New York and LA — those meant to land a new African-American female cast member for the show. (Via YouTube / funnygirlLKT, YouTube / TheLaughFactory)

According to Defamer, SNL producers were "impressed with both Tookes and Jones and thought they were talented, smart and funny."

Tookes is a former news reporter turned comedian, who spent some time at the Improv Olympic Theater in Los Angeles. She also does a few impressions. (Via YouTube / funnygirlLKT)

And Jones has a slightly longer resume, having appeared on shows such as "The League" and "Sullivan & Son" and her own comedy special on Showtime in 2011.

Both women, of course, lost out to Upright Citizens Brigade alum Sasheer Zamata, who was named as a cast member earlier this week. She's set to debut Jan. 18 when Drake hosts. (Via Vimeo / Sasheer Zamata)

All three women were hired after the show faced criticism for its lack of diversity. Before the current season, the show added six new cast members, five of whom were white men and one a white woman. (Via Salon)

It was an unbalanced racial profile the show made light of in a cold open when Kerry Washington hosted.

JAY PHAROAH AS BARACK OBAMA: "Is there anyone else out there?"

Despite cracking jokes, though, do the new moves show that SNL is taking its lack of color seriously?

A writer for Time says yes, adding: "Arguably this is an even more significant move. For one thing, because SNL didn't need to do it at all; it could have made one visible cast hire and watched the diversity controversy blow over."

As Gothamist reports, there currently aren't any plans for Tookes or Jones to spend time in front of the camera, but that hasn't stopped writers from making the transition before.

Former SNL cast members Jason Sudeikis and Tina Fey, as well as newcomer Mike O'Brien, all got their starts with the show in the writers' room.

Tookes and Jones are expected to begin their new jobs Monday.