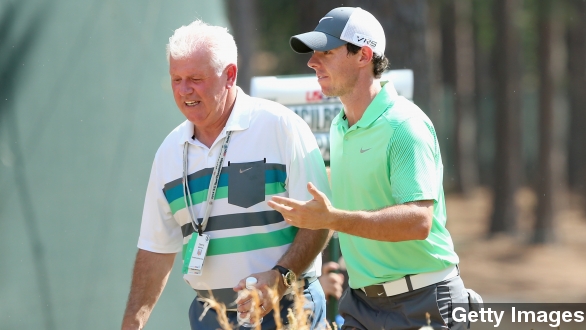 It was a sweet, sweet Sunday for the McIlroy family. (Via Getty Images)

That's because Rory just captured his third major title Sunday at The British Open, just as father bet he would a decade ago. (Via Getty Images)

With the win at Hoylake, his father Gerry is now walking away some $350,000 richer from that wager. (Via Getty Images)

The eldest McIlroy and some of his friends apparently placed a bet 10 years ago that Rory would win at The Open before turning 26. (Via USA Today)

And since Rory won this year, his father and his friends just pocketed about $85,000 per person.

Cotter says the McIlroy's don't really need the money, the prize for winning The Open is nearly triple the bet's payout. It's more about Rory's legacy.

The Northern Irishman won his first major title at the U.S. Open in 2011 and then the PGA Championship in 2012. (Via Getty Images)

His victory Sunday makes him the third youngest golfer to win three out of the four major tournaments. The two youngest: Tiger Woods and Jack Nicklaus — pretty good company. (Via Getty Images)

To win, McIlroy was able to stave-off American Rickie Fowler and Spaniard Sergio Garcia, both of whom finished just two strokes behind. Rory shot -17 for the tournament. (Via Getty Images)