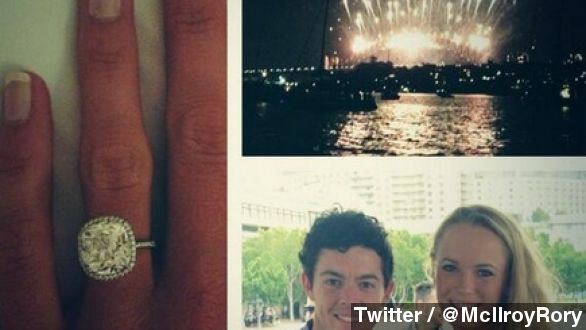 By Candice Aviles
December 31, 2013
The couple tweeted the engagement news, saying they are starting the new year off with a bang.
SHOW TRANSCRIPT

Golfer McIlroy tweeted the news, writing: “Happy New Year everyone! I have a feeling it’s going to be a great year!! My first victory of 2014 #shesaidyes!!” (Via Twitter / @McIlroyRory)

Tennis pro Wozniacki also tweeted out the news, along with a picture of her sizeable engagement ring, saying they’re starting the new year off with a bang. (Via Twitter / @CaroWozniacki)

A writer for Bleacher Report says the engagement may come as a surprise because of reports of a rocky 2013 for the couple.

The Irish Independent reported McIlroy broke off the relationship a few months ago after Wozniacki posted this photo of him sleeping with his mouth open on Twitter. (Via Twitter / @CaroWozniacki)

The couple are currently in Sydney, Australia. Wozniacki is preparing for the Australian Open on January 13. The couple started dating in 2011. (Via Los Angeles Times)