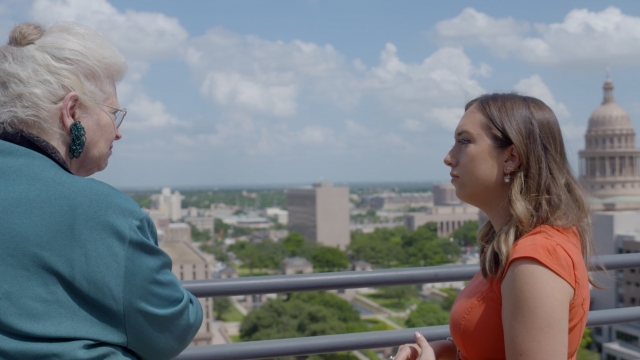 It's been nearly half a century, but Sarah Weddington can still count the number of states women used to go to get an abortion on one hand.

"A lot of women went to California," she remembered. "There was a flight every Sunday — no, it was every Thursday. New York was mostly legal. D.C. was partially legal. There were a lot of places that you had to know which one to go to and how to get there."

She spent much of her early 20s arranging these kinds of trips for women until she took on the nation's highest court to make abortion legal everywhere.

Weddington represented "Jane Roe" in Roe v. Wade, and judges ruled in her favor 7-2. At the time, she says, abortion wasn't a partisan issue. There wasn't an overwhelming response. Times have changed.

"You just had a big group of Republicans in the legislature and other places who were pro-choice. And now I don't think you could find any important person in the Texas capitol that's Republican and pro-choice," she said.

As state bills limiting abortion pass across America, Weddington says what she's seeing reminds her of the time before her landmark case.

"Before Roe, you had a lot of effort going into getting women get to places where they could have a legal abortion. That's what you're seeing today," she said. "Back then you saw doctors being afraid. One of the plaintiffs was a doctor; now you have doctors worried because some, one of those bills could sentence them to 99 years in jail. There's a lot of similarities."

She says she doesn't believe that these bills, passed by predominantly white men, are representative of people's true feelings on the issue. A Newsy poll found more than six in 10 Republicans want to overturn Roe v. Wade, while almost all Democrats want to keep it intact.

"I think the opponents are going way too far. I think there's going to be a real reaction to what they have suggested the law ought to be. Frankly, I hope there will be such a reaction," Weddington said. "Because I think it'll help us win and them lose."

She does say the new polarization and make-up of the court worries her. Weddington wants the justices to respect two things: privacy and precedent.

"There is a right of privacy," she explained. "It may not be spelled out word by word, but the concept that people in the U.S. have a right to make their own decisions is very much there."

Some don't want to leave it up to the courts. Nearly every 2020 Democratic candidate supports codifying Roe into law, something Weddington herself tried to do before her case was decided. At the time, she was also a member of the Texas legislature.

"Once Roe was decided, everyone said, 'We don't need that law now.' So we didn't keep focus on it. Maybe we should have," she said.

"It's very important for us to have pro-choice people in the legislature, on the courts and in a lot of places. Texas is one example; you have judges elected, and so who gets elected is really important. And if you look nationally, the justices get appointed — and so that means who's president, who holds other top positions, becomes important," she said.

She says now is the turning point for women who thought this was a done deal to realize it's not.