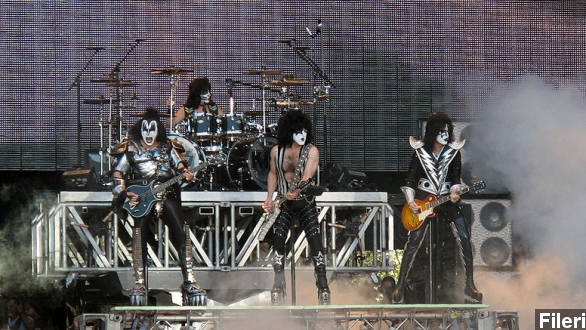 The Rock and Roll Hall of Fame inductee class of 2014 has been revealed.

Nirvana is making the cut in the band's first year of eligibility — 25 years after its first album. Critics agree the band's influence on American music has been lasting. (Via Geffen Records)

"'That's really no surprise to me,' says Rock and Roll Hall of Fame President and CEO Joel Peresman. 'People see the relevancy of that band.'" (Via Rolling Stone)

And then there's KISS. Not such a critical favorite, the band has been eligible for 15 years. After getting the highest percentage of a fan vote this year, they're finally in. (Via Island Def Jam)

Also getting awarded is The E Street Band, receiving the Award for Musical Excellence. (Via Bruce Springsteen)

And the original managers of the Beatles and the Rolling Stones, Brian Epstein and Andrew Loog Oldham, respectively, will be awarded as non-performers. (Via Apple, ABKCO Films / Because Entertainment)

The induction ceremony show will take place in April at Brooklyn's Barclay Center — the first time the ceremony has been held at an arena, making it the biggest ever.