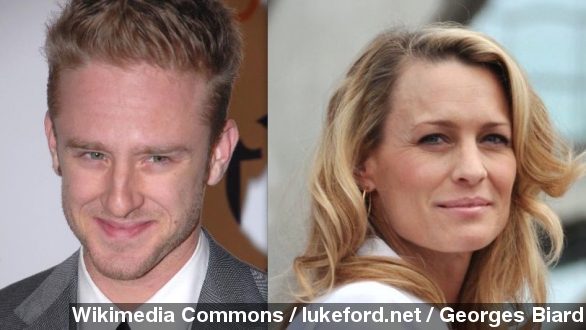 By Lauren Zima
January 11, 2014
The "House of Cards" star and her younger fiance have been linked since early 2012.
SHOW TRANSCRIPT

Eyebrows were raised Friday night in Los Angeles. On the red carpet, Wright sported a sparkler on her ring finger. Her rep then confirmed the engagement to People Magazine.

There had been rumors in recent weeks. In mid-December, Life & Style reported the two were set to wed, according to unnamed sources.

The pair has been romantically linked since early 2012. Wright is known in the tabloids for her tumultuous relationship with ex-husband Sean Penn. (Via Netflix)

Wright and Penn had dated since the '90s and finally got divorced after 13 years of marriage in 2010. They'd gone back and forth with separations and filings, and Penn spoke ill of Wright in the press. (Via E!, Us Weekly)

This will be the third marriage for Wright and the first for Foster. Foster is known for the "X-Men" films, among other roles. He's set to star next as Lance Armstrong in an upcoming biopic.