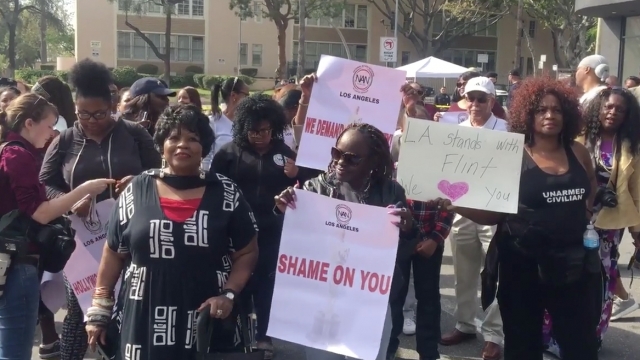 SMS
Rev. Al Sharpton Led #OscarsSoWhite Protest In Hollywood
By Cody LaGrow
By Cody LaGrow
February 28, 2016
Dozens of people gathered in Los Angeles on the day of the 88th Academy Awards to call for more diversity and inclusion in the film industry.
SHOW TRANSCRIPT

Rev. Al Sharpton led a protest in Los Angeles on Sunday to call out the academy for letting another #OscarsSoWhite happen.

"Why shouldn't we be recognized along with their counterparts, white actors and actresses as well, you know?" asked Edwina Kennedy Mayse.

There isn't a single person of color nominated in any of the four acting categories.

"I definitely think there were some choices that weren't nominated that should've been," said protester Jason Dombrow.

"Anyone that's black, white, Latino or Asian and pays big money for your tickets, let me hear you scream," said one protester.

The group said they plan to "take a unified stand for diversity, inclusion and justice in Hollywood."

This is the second year in a row all of the acting nominees are white.

This video includes clips from Stringr.