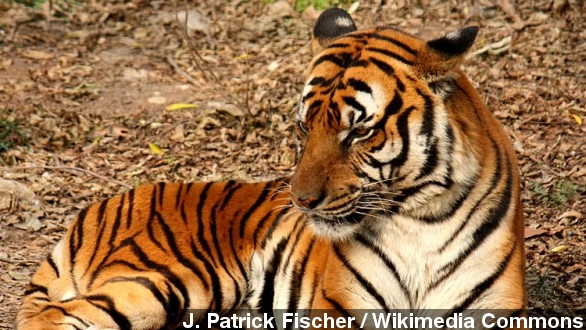 By Matt Moreno
November 26, 2013
The Hollywood Reporter claims animals have been harmed on several big movie sets despite the films getting "no animals harmed in the making" tags.
SHOW TRANSCRIPT

A new report claims that animals have been harmed on several big movie sets -- despite claims they were kept safe.

A new expose by The Hollywood Reporter uncovers several incidents during which animals were apparently harmed, nearly died or did die during filming of productions that were still given that well-known "no animals harmed were harmed during the making of this production" tag.

The American Humane Association is in charge of making sure animals are treated humanely on production sets, but the report says that doesn't always happen.

In one of the most scathing pieces of evidence, one whistleblower from the "Life of Pi" set made an email from on-set AHA monitor Gina Johnson public. In it, Johnson says King the tiger nearly drowned, but not to tell anyone. (20th Century Fox / 'Life of Pi')

"...last week we almost f--ing killed King in the water tank. This one take with him just went really bad and he got lost trying to swim to the side. ... DON'T MENTION IT TO ANYONE, ESPECIALLY THE OFFICE! I have down-played the f-- out of it." (Via Salon)

"Life of Pi" did earn that "No Animals Were Harmed" stamp of approval. But, it's not the only movie named by the report.

A Husky dog was reportedly punched repeatedly during filming of the 2006 Disney movie "Eight Below."

In 2003, sea life washed ashore days after Disney's "Pirates of the Caribbean: The Curse of the Black Pearl" shot off explosions in the middle of the ocean.

The AHA also reportedly refused to investigate the death 27 animals during filming of "The Hobbit."

And, according to a former AHA employee, the association allegedly tried to cover up the death of a horse on the set of Steven Spielberg's film "War Horse."

And those are just a few of the productions involved, according to THR. The AHA has denied the allegations. But if all this is true, how can it be stopped?

A writer for The Week says one way to fix the problem is "audiences start getting angry over this neglect and abuse. And a couple of high-profile actors speaking up wouldn't hurt either."

While a writer for Slate has another suggestion saying, "I hope the Department of Agriculture, the governmental agency usually tasked with protecting animals from neglect and abuse, begins sending agents to Hollywood very, very soon."

During several inquiries by The Hollywood Reporter for the story, the AHA says its recently made changes to the way it operates in hopes of improving and preventing harm to animals.