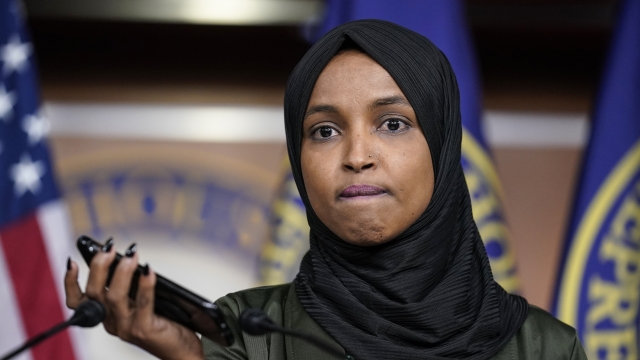 Democratic Minnesota Rep. Ilhan Omar on Tuesday played a harrowing death threat recently left for her by voicemail, while imploring House Republican leaders to do more to tamp down "anti-Muslim hatred" in their ranks and "hold those who perpetuate it accountable."

Omar, one of only a handful of Muslim members of Congress, has been the subject of repeated attacks by conservative pundits and some Republicans in Congress, which she says have led to an increase in the number of death threats she receives. The most recent instance came after a video of first-term Colorado Rep. Lauren Boebert calling Omar a member of the "jihad squad" and likening her to a bomb-carrying terrorist went viral.

"When a sitting member of Congress calls a colleague a member of the 'jihad squad' and falsifies a story to suggest I will blow up the Capitol, it is not just an attack on me but on millions of American Muslims across the country," Omar said during a news conference Tuesday. "We cannot pretend this hate speech from leading politicians doesn't have real consequences."

Then Omar played the voicemail, laden with profanity, racial epithets and a threat to "take you off the face of the (expletive) earth," which she said was among hundreds of such messages she has reported since joining Congress. Omar said the voicemail was left for her after Boebert released another video on Monday attacking her.

In the grainy recording, a man can be heard saying, "You will not be living much longer, b——" while promising that "we the people are rising up." He also calls Omar a "traitor" and pledges that she will stand trial before a military tribunal.

Omar then concluded, "It is time for the Republican Party to actually do something to confront anti-Muslim hatred in its ranks and hold those who perpetuate it accountable."

Boebert's incendiary remarks are just the latest example of a GOP lawmaker making a personal attack against another member of Congress, an unsettling trend that has gone largely unchecked by House Republican leaders.

The chain of events was set in motion over a week ago when a video posted to Facebook showed Boebert speaking at an event and describing an interaction with Omar — an interaction Omar maintains never happened.

In the video, Boebert claims that a Capitol Police officer approached her with "fret on his face" shortly before she stepped aboard a House elevator and the doors closed.

"I look to my left and there she is — Ilhan Omar. And I said: 'Well, she doesn't have a backpack. We should be fine,'" Boebert says with a laugh.

Boebert's comment about Omar not wearing a backpack was an apparent reference to her not carrying a suicide bomb.

Reaction to the video was swift. Omar called on House Speaker Nancy Pelosi and Republican Minority Leader Kevin McCarthy to "take appropriate action." But so far McCarthy, who is in line to become House speaker if Republicans retake the majority next year, has proven reluctant to police members of his caucus whose views are often closely aligned with the party's base.

Democratic Rep. Andre Carson, who is also Muslim, said he is working with Democratic leadership on a House resolution that could address the issue.

Boebert initially took steps to ease the situation. Last week, she apologized "to anyone in the Muslim community I offended," but not directly to Omar.

But after declining to apologize directly to Omar during a tense phone call Monday, which Omar abruptly ended, Boebert again went on the attack.

"Rejecting an apology and hanging up on someone is part of cancel culture 101 and a pillar of the Democrat Party," Boebert said in an Instagram video.

So far, McCarthy is taking her side.

When asked Tuesday what he would do if Democrats tried to censure Boebert, McCarthy said: "After she apologized personally and publicly? I'd vote against it."