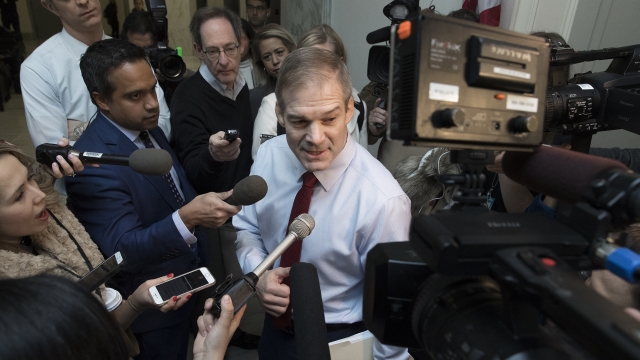 SMS
Rep. Jim Jordan Accused Of Disregarding Sexual Misconduct Complaint
By Alec Larson
By Alec Larson
November 9, 2019
Jordan has been accused of dismissing a report of sexual misconduct when he was an assistant coach at Ohio State.
SHOW TRANSCRIPT

According to a recently filed lawsuit, Jordan reacted dismissively and failed to take any action against Strauss, who continued to see and abuse students at the university. Strauss was found by independent investigators to have sexually abused at least 177 male students over the course of two decades.

The lawsuit filed Thursday by 43 survivors claims that Ohio State's "ingrained culture of institutional indifference" allowed Strauss to carry out his sexual misconduct.

This is the second time someone suing Ohio State has said they reported Strauss' sexual misconduct to Jordan. A former wrestler, part of a separate lawsuit filed against the school in June, told NBC News that "Jordan and the other coaches knew what was going on and they blew it off." Jordan was not named in that complaint, though.

A spokesperson from Jordan's office said in a statement Friday: "Congressman Jordan never saw or heard of any kind of sexual abuse, and if he had he would've dealt with it. Multiple investigations have confirmed this simple fact."