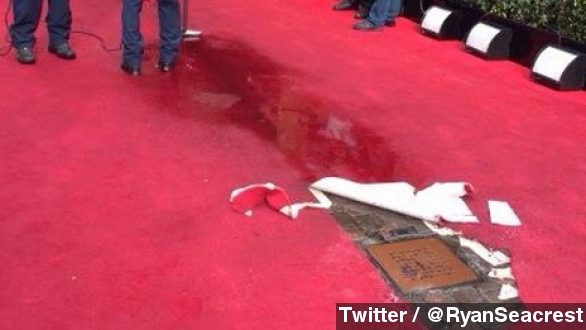 SMS
Red Carpet Floods Hours Before Golden Globes
By Alex Mallin
By Alex Mallin
January 12, 2014
The carpet where Hollywood's biggest names were due to arrive was soaked with sewage-smelling water after a sprinkler system malfunctioned.
SHOW TRANSCRIPT

So the forecast for Beverly Hills didn’t call for rain, but that didn’t stop flooding on the red carpet just before the start of the Golden Globes Sunday.​

Videos from spectators show some of the reportedly 5,000 gallons of water that shot out of a sprinkler system outside of the Beverly Hilton. It happened after a lighting rig got a little too close to the heat sensor. (Via USA Today, ABC)

Pictures show the true extent of the damage, which put clean-up crews in a frenzy to fix the mess just hours before Hollywood’s biggest names began to arrive. (Via CBS)

Ryan Seacrest took to Twitter with commentary on the soggy aftermath, noting: “Could be bad for long gowns.” (Via Twitter / @RyanSeacrest)

Definitely. It made for some good small talk, though, including an exchange between Seacrest and 'The Big Bang Theory'’s Jim Parsons.​

PARSONS: “I got reports saying there’s sewage on the red carpet.”

SEACREST: “There was a pipe that burst, and it’s just wet.”

SEACREST: “I didn’t get too close to it.”

PARSONS: “I don’t smell anything.”

PARSONS:“Oh! Maybe the goods are still to come.” (Via E!)

Globes producer Dick Clark Productions released a statement brushing off the incident saying: “We heard some of the biggest names in entertainment were coming to The Golden Globe Awards tonight and we wanted to give the carpet one last wash before it opened.” (Via Deadline Hollywood)

Witnesses reportedly said the water smelled like sewage. Workers brought in special cleaners and even cut up and replaced parts of the damaged red carpet before the festivities got underway. (Via KABC)