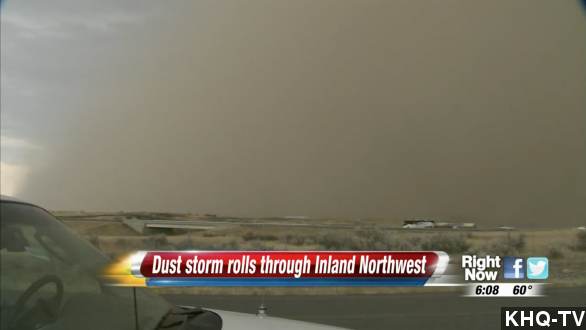 A combination of weather conditions had parts of the Evergreen State looking more like the Sahara on Tuesday.

This massive dust storm  — also known as a haboob, as many outlets eagerly pointed out — rolled through eastern Washington on the back of heavy winds caused by a storm. (Video via KIRO)

KHQ-TV: "It changed day to near night in minutes yesterday. ... It caused several crashes yesterday afternoon and into the evening, temporarily shut down I-90 west of Ritzville."

As Spokane newspaper The Spokesman-Review reports, the storm that caused the haboob was strong enough to knock over trees, down power lines and cause three separate brush fires.

This summer's dry conditions in the state have already produced what is reportedly the worst wildfire Washington has ever seen — the Carlton Complex Fire, which was also started by lightning strikes. (Video via KCPQ)

But it was the dust storm that grabbed national attention, with Fox News picking up the story as well as MSNBC.

Although outlets reported storms like this are rare, they're not unheard of in the region.

KREM: "The National Weather Service says we see major dust storms like this once about every two years."

In fact, less than a year ago, Washington saw another big dust storm in the same part of the state.

Still, haboobs tend to stick to much more arid environments like deserts, and in the U.S. they're most common in the Southwest, near the Sonoran Desert.