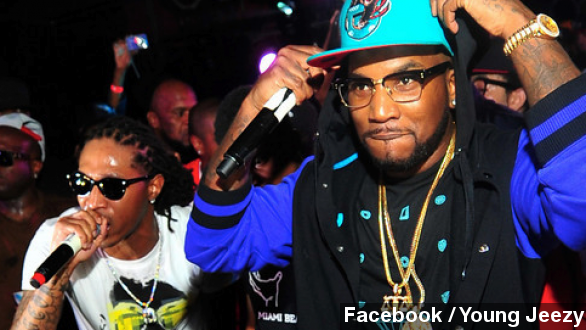 By Christian Bryant
January 7, 2014
The Atlanta-based hip hop artist turned himself in to local authorities after being accused of beating and threatening to kill his son.
SHOW TRANSCRIPT

Atlanta hip-hop artist Young Jeezy turned himself in to authorities last weekend over charges stemming from a 2012 altercation with his son.

According to TMZ, the charges say the 36-year-old Jeezy got in a nasty brawl with his son back in Sept. 2012. The source says the hip hop star "threw his son into the glass shower door ... punched him in the face, dragged him into the bedroom ... and pummeled him."

Other sources allege Jeezy then took it a step farther, telling his son he would put a bullet in his head and, if he could get away with it, he would kill him. (Via Spin)

The Atlanta rapper has had other run-ins with the law, including a 2005 arrest following a shootout in Miami's South Beach. Authorities charged him with carrying a concealed firearm, but those charges were later dropped. (Via YouTube / 105.1BreakfastClub)

MTV reports Atlanta police arrested him in 2008 on multiple charges including driving under the influence, speeding and reckless driving.

Jeezy was released on $45,000 bond. Atlanta's WXIA reports his plea and arraignment hearing is set for Jan. 29.