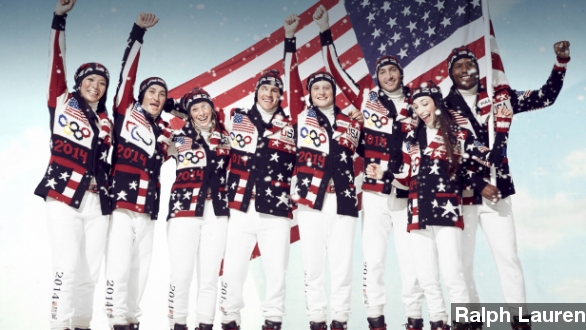 By Matt Moreno
January 23, 2014
Ralph Lauren showed off the U.S. uniforms for the 2014 Olympic opening ceremony for the first time Thursday.
SHOW TRANSCRIPT

The new U.S.A. Olympic opening ceremony uniforms are in, and they're certainly warm and patriotic, to say the least.

The uniforms were unveiled on NBC's "Today Show" Thursday and include a patriotic cardigan, a cotton turtleneck sweater, white pants, black leather boots, a hat and gloves.

"Ralph Lauren was inspired by the classic Americana patchwork quilts and sweaters. We tried to do something by hand, made in America, so we're very excited."

"The wool came from Oregon, and it was spun in Pennsylvania, North Carolina and then went to California for the knitting." (Via WDAF)

"Ralph Lauren admits finding the more than 40 American partners needed to make everything was a challenge. ... Because of the high cost to make the domestic designs, it'll cost you more to dress like Team USA." (Via KTVB)

Ralph Lauren is pushing the "100 percent made in America" part of this year's uniform. The designer was criticized for the 2012 Summer Olympic ones that were made overseas in China. (Via Ralph Lauren)

But what about the design itself? Well, it's getting mixed reactions.

USA Today blog For the Win compares the uniform to something your "rich aunt" would wear.

"You know what? Maybe that's why I like them." (Via WVIT)

"I actually don't mind them. I think they're festive and patriotic. Yeah."

Well, trendy or not, one ThinkProgress writer says: "However ugly the uniforms are, there will be no doubt about where the athletes come from. These are outspokenly patriotic."

If you want to dress like the athletes yourself, the clothing can be found on the Ralph Lauren website with items ranging from $75 to $600. The 2014 Olympic opening ceremony takes place Feb. 7 in Sochi, Russia.