Puma Finds Love In A Hopeless Place With Rihanna-Designed Apparel 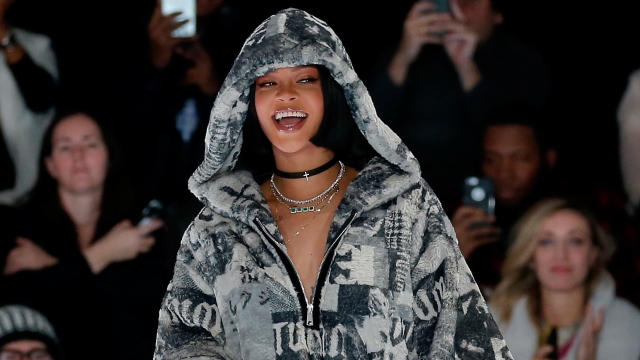 SMS
Puma Finds Love In A Hopeless Place With Rihanna-Designed Apparel
By Cody LaGrow
By Cody LaGrow
February 18, 2016
The German sportswear company reported that sales grew at a double-digit percentage — largely due to its footwear designed by the singer.
SHOW TRANSCRIPT

Rihanna may actually be ballin' bigger than Lebron. She just dropped a highly anticipated album, is about to embark on a world tour, and is now credited for pumping up Puma's profits.

Puma said its fourth-quarter sales grew at a double-digit percentage largely because of RiRi. Rihanna took over as Puma's women's creative director a year ago, and the company found love in a hopeless place of struggling sales.

Puma's CEO said, "She can sell sneakers, and Puma is on to something here which we haven't seen yet in the women's area."

How 'bout a round of applause for Rihanna. The singer designed two sneakers for the German athletic brand in 2015 — the limited edition "Creeper" and the "Eskiva."

Puma envisions a "female future" driven by the Barbadian bombshell who is wheeling and dealing in the boardroom. Just last month, Rihanna was named the most marketable of all big-name celebrities.