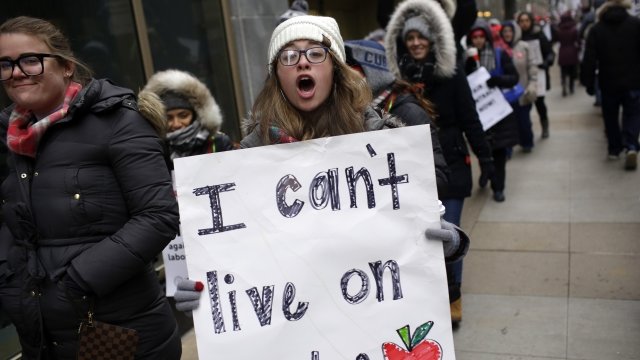 SMS
Public School Workers Quit Jobs At Record Rate In 2018
By Ahmed Jawadi
By Ahmed Jawadi
December 31, 2018
​The Wall Street Journal points to a variety of reasons, but key among them are issues of low pay and poor working conditions.
SHOW TRANSCRIPT

More U.S. public school employees quit their jobs in 2018 than in any other time on record.

Citing data from the U.S. Department of Labor, the Wall Street Journal said more than 1 million public school workers — including teachers as well as employees like janitors and school psychologists — quit in the one-year period ending in October 2018. That's an average rate of 83 per 10,000 every month in the first 10 months of 2018.

Although that rate is lower than the rate for U.S. workers overall, it's still the highest it's been for the public education workforce since the Labor Department began recording that data in 2001.

The Wall Street Journal points to a variety of reasons, but key among them are low pay and poor working conditions. Many of those reasons pushed teachers to protest in six states this year,  including in West Virginia, Oklahoma and Washington.