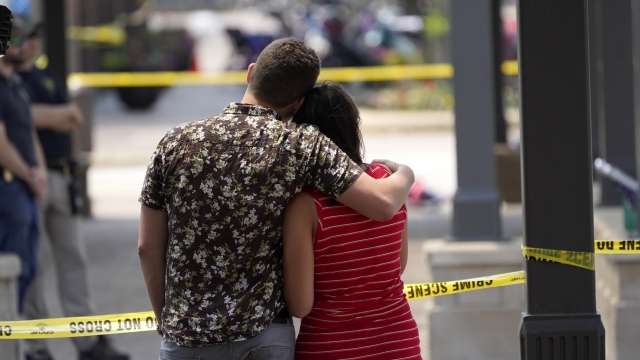 SMS
Psychologist Explains Why Anger With Gunmen Families Isn't Always Fair
By Clayton Sandell
By Clayton Sandell
July 5, 2022
After a mass shooting, many wonder how the family of a gunman didn't see the signs, but one expert says the shooter often keeps their plans secret.

Often in the search for answers after a shooting, there are pointed questions directed at the people closest to young shooters and their families.

Not much is known about the alleged Highland Park gunman’s family.  His father reportedly used to own a deli in the town and once ran for mayor but lost.  His uncle is quoted as saying his nephew was quiet, and he had no idea he might be capable of something like this.

Andrew Solomon wrote the book "Far from the Tree: Parents, Children and the Search for Identity" and is a professor of clinical psychology at Columbia University in New York. He has spoken with the parents of several mass shooters — from Columbine, Newtown and the Aurora theater massacre.

"What is most striking to me as I talk to these parents is first their sense of incredulity that no matter how difficult or how strange or how unusual their children have been, they are blown away by the fact that their child could actually do something as extreme as this and then torn, I think, between the fact that they, like most parents, have loved their child and that they have to reconcile themselves to something so grotesque that has happened," Solomon said. "I always think back to Sue Klebold saying to me that she loved her own children so much that you would never have wanted to imagine a life without them."

Solomon says that public anger is often directed at the parents and relatives of mass shooters since they’re the ones who, in theory, should have seen the signs. But Solomon says someone planning a violent attack can be very good at hiding it, even from their parents.

"The ordinary assumption is, well, you must have been pretty stupid if you never expected that," Solomon said. "The reality is that it was perhaps impossible to anticipate or to see that this was coming. People who want to keep things private, can keep them very private. Gay children grow up with parents who have absolutely no idea and are shocked when they find out. People who are plotting acts of extreme violence are often people who know that if they're found out they won't be able to carry through with those acts of extreme violence."

The bottom line is: Often only the shooter knows what he's planning to do.

There's also the assumption that kids who grow up to be mass murderers are the product of bad parenting. Solomon says while childhood trauma and abuse can lead to a life of more ordinary crimes, even a mass shooter can still come from a good home.

"Usually there is the judgment of the world, which tends to suppose that the reason people do these things is because they have been badly parented, which is a very comforting delusion," Solomon said. "You know, 'If this happens because children get bad and badly parented, then my children who have been well parented could never do such a thing.'"

Sue Klebold, the mother of one of the Columbine gunmen, told Solomon she does wish she’d read her son’s diaries and uncovered his plan but had wanted to respect his privacy. The father of the Sandy Hook Elementary School shooter told Solomon he wished his son had never been born. Often, Solomon says, the most painful part for parents of mass shooters is the memory of who they used to be.