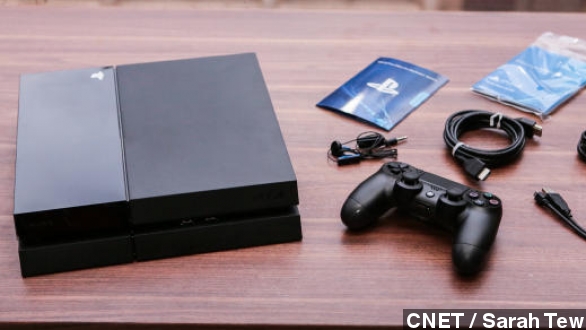 By Christian Bryant
November 16, 2013
Reviews are pouring in for the newly released gaming console, which some critics say is worth the hype but lacking in game selection.
SHOW TRANSCRIPT

Gamers finally got their hands on the long-awaited PlayStation 4 Friday, and as more people dive into the console, critics are already gushing about Sony's newest release.

Of course, it's not hard to see why people are excited about the new gaming console: It's the first PlayStation in more than seven years. Let's put that into perspective. (Via The Verge)

"The last time Sony released its PlayStation, the iPhone didn't even exist; it was 2006. Needless to say, there's some major improvements." (Via CNN)

Polygon names some of the issues with Sony's last console and what it did to fix them: "Difficult to program for? Check. Bad controllers? Check. Too expensive? Check."

It won't cook for you, but it's powerful, it's fast, and a writer for The Verge calls it a "$399 love letter to gamers everywhere." But for all the positive buzz, critics have pointed out a few things the console doesn't offer.

A writer for The Washington Post suggests the console will need time to "mature and gain more content." She says: "The game selection at launch is a bit light on blockbuster exclusives. ... Sony has 23 games available at launch, but many of its exclusives are offbeat titles such as 'Knack,' which may not hold the wide appeal of Xbox One exclusives such as the racing game 'Forza 5.'"

A writer for PC Magazine has a more extensive list of complaints, like "No YouTube sharing," "It can't play your old games" — sorry, PS3 owners — and although it can support 3D games, there aren't any 3D-compatible launch titles.

While those critiques seem to be fair, at least the people reviewing the console got their new purchases to work.

The Next Web reports some customers dropped nearly half a G only to get home and find their consoles dead out of the box. The outlet reports customers experienced "no video, repeated crashing or the device simply not booting at all." Talk about killing the celebratory vibe.

But a Sony representative told IGN less than 1 percent of consoles seem to be affected. If you are one of the unlucky ones, several outlets encourage contacting Sony support to get things straightened out.

If you don't have a PS4 just yet, I guess the most important question is "to buy, or not to buy?"

PS4 reviewers at Kotaku, The Verge and Polygon all agree yes, you should buy it ... but probably not right now. The console shows potential, but the software library isn't up to snuff just yet.

The PS4 will get some competition in the next-gen gaming market when Microsoft's Xbox One goes on sale at midnight Nov. 22.