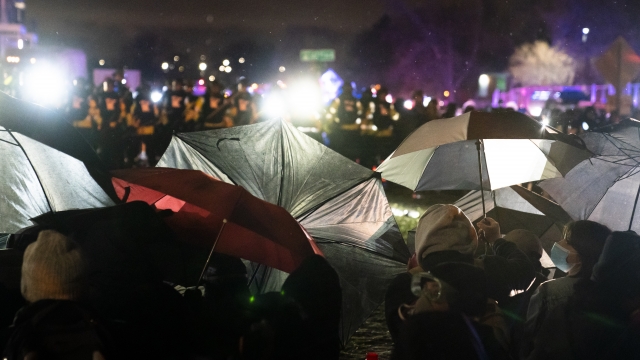 SMS
Protests Continue In Minnesota And Around The U.S.

By Eliana Moreno
April 14, 2021
Officers fired flash-bang and gas grenades, and demonstrators started throwing objects back at them.
SHOW TRANSCRIPT

About an hour and a half before the 10 p.m. curfew, police started telling people to leave the area outside the Brooklyn Center police department. That's when things got tense.

Officers fired flash-bang and gas grenades. And demonstrators started throwing objects back at them.

Even in the rain, the snow and the cold — demonstrators kept at it.

But just as we saw after the killing of George Floyd, Daunte Wright's killing is sparking national outrage.

Demonstrators filled the streets in Chicago, New York, Milwaukee and other major cities.