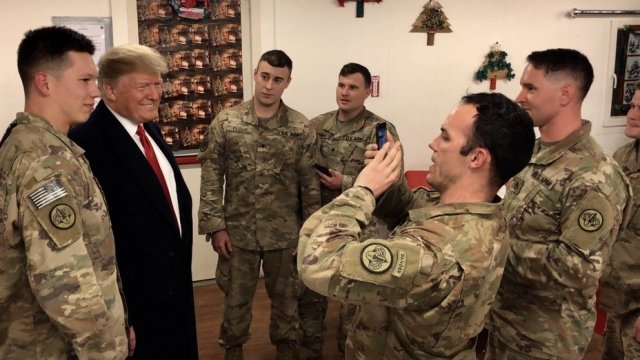 SMS
Trump Pays Surprise Visit To Troops Stationed In Iraq
By Audrey Esther
By Audrey Esther
December 26, 2018
President Trump and the first lady made a surprise appearance at Al Asad Air Base on Wednesday.
SHOW TRANSCRIPT

President Donald Trump and the first lady made a surprise visit to troops in Iraq one day after Christmas.

The first couple arrived on Wednesday at Al Asad Air Base, which is located west of Baghdad. It was the commander-in-chief's first visit to troops in a war zone since he took office.

Trump said he had safety concerns about visiting Iraq, but not so much about his own.

According to the White House, the Trumps spent about three hours with troops — thanking them, taking pictures and signing autographs.

The president also answered questions from reporters. He reportedly said he has no plans to pull troops out of Iraq. About a week ago, he announced he'd be withdrawing troops from Iraq's neighbor Syria.

"The other reason I'm here today is to personally thank you and every service member throughout this region for the near elimination of the ISIS territorial caliphate in Iraq and in Syria," Trump said.

While there he also spoke about the partial government shutdown back in the U.S. and again implied it will continue until he gets funding for a wall along the U.S.-Mexico border.

"We're going to have safety. We need safety," Trump said.