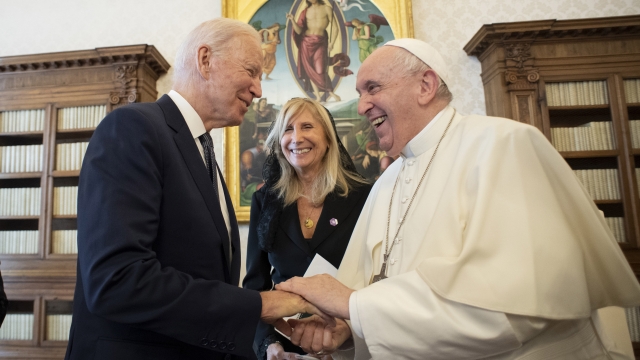 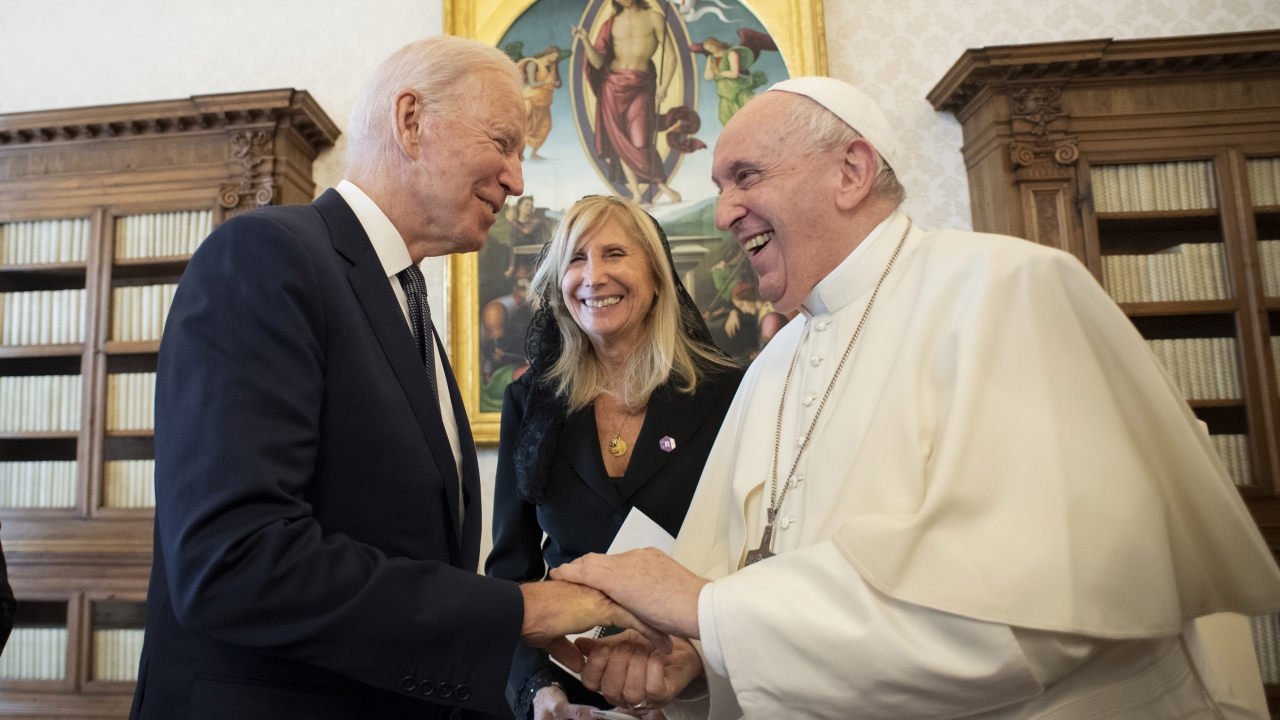 President biden is in Rome this morning preparing to meet with Pope Francis.

The two are expected to discuss several issues ranging from immigration to climate change.

Sitting face-to-face across a desk, President Joe Biden and Pope Francis engaged in extended talks on climate change, poverty and the coronavirus pandemic Friday as the world's two most prominent Roman Catholics ran overtime in highly personal discussions that also touched on the loss of president's adult son and jokes about aging well.

Video released by the Vatican showed several warm, relaxed moments between Francis and President Biden as they repeatedly shook hands and smiled. Francis often sports a dour look, especially in official photos, but he seemed in good spirits Friday. Their private meeting lasted about 75 minutes, according to the Vatican, an unusually long time for an audience with the pontiff.

The pair sat across from one another at a desk in the papal library, accompanied by a translator. They then proceeded to an exchange of gifts and a broader meeting including the first lady and top officials. The lengthy session put President Biden more than an hour behind schedule for his later meetings.

"Biden thanked His Holiness for his advocacy for the world's poor and those suffering from hunger, conflict, and persecution," the White House said. "He lauded Pope Francis' leadership in fighting the climate crisis, as well as his advocacy to ensure the pandemic ends for everyone through vaccine sharing and an equitable global economic recovery."

A dozen Swiss Guards in their blue and gold-striped uniforms and red-plumed halberds stood at attention in the San Damaso courtyard as President Biden and his wife, Jill, arrived. They were received by Monsignor Leonardo Sapienza, who runs the papal household, and then greeted one by one the papal ushers, or papal gentlemen, who lined up in the courtyard.

"It's good to be back," President Biden said as he shook the hand of one of them. "I'm Jill's husband," he said to another before he was ushered into the frescoed Apostolic Palace and taken upstairs to the pope's private library.

According to the Vatican, President Biden presented Francis a woven chasuble, or liturgical vestment, made in 1930 by the famed papal tailor Gamarelli and used by the pope's Jesuit order in the U.S., where it was held in the archives of Holy Trinity Church, President Biden's regular parish in Washington. The White House said it would make a donation to charity in the pope's name.

Holy Trinity is steeped in American history and played a role in advocating for abolition, desegregation and civil rights since it was founded in 1787. President John F. Kennedy, the first Catholic U.S. president, also worshiped there.

President Biden also presented the pope with what's known as a challenge coin, passing it to the pope in the palm of his hand as they shared a handshake, hailing Francis as "the most significant warrior for peace I've ever met."

President Biden described his personalized coin features to the pope. It includes a depiction of President Biden's home state of Delaware and a reference to his late son Beau's military unit, the 261st Theater Tactical Signal Brigade. President Biden told Francis that Beau would have wanted him to present it to the pope.

"The tradition is, and I'm only kidding about this, but next time I see you, if you don't have it, you have to buy the drinks," President Biden said, referring to the coin. He added: "I'm the only Irishman you've ever met who's never had a drink."

Francis gave President Biden a ceramic tile depicting the iconography of the pilgrim, as well as a collection of the pope's main teaching documents, the Vatican said.

President Biden takes pride in his Catholic faith, using it as moral guidepost to shape many of his social and economic policies. President Biden wears a rosary and frequently attends Mass, yet his support for abortion rights and same-sex marriage has put him at odds with many U.S. bishops, some of whom have suggested he should be denied Communion.

No live pictures or video of the meeting were provided due to last-minute Vatican restrictions on press access.

White House press secretary Jen Psaki, in previewing the visit, said "there's a great deal of agreement and overlap with the president and Pope Francis on a range of issues: poverty, combating the climate crisis, ending the COVID-19 pandemic. These are all hugely important, impactful issues that will be the centerpiece of what their discussion is when they meet."

President Biden is visiting Rome and then Glasgow, Scotland, for back-to-back summits, first a gathering for leaders of Group of 20 leading and developing nations and then a global climate conference.

Following the papal meeting, President Biden was set to meet separately Friday with Group of 20 summit hosts Italian President Sergio Mattarella and Italian Prime Minister Mario Draghi. He will end the day by meeting with French President Emmanuel Macron, part of an effort to mend relations with France after the U.S. and U.K. decided to provide nuclear-powered submarines to Australia, scotching an existing French contract.

President Biden's meeting with Pope Francis generated some controversy in advance as the Vatican on Thursday abruptly canceled plans to broadcast the meeting with President Biden live and denied press access. Vatican spokesman Matteo Bruni said the revised television plan reflected the virus protocol for all heads of state audiences, though he didn't say why more robust live TV coverage had been initially scheduled and then canceled.

The Vatican said it would provide edited footage of the encounter to accredited media.

The visit came as U.S. bishops prepared to meet in roughly three weeks in Baltimore for their annual fall convention. Among the agenda items is an effort by conservatives to disqualify President Biden from receiving Communion. Any document emerging from the event is unlikely to single out the president by name, but he still could face some form of rebuke.

Francis has stressed that he will not reject political leaders who support abortion rights, though Catholic policy allows individual bishops to choose whether to prevent people from taking Communion.

Burke didn't cite President Biden by name, but said such Catholic politicians were causing grave scandal to the faithful since church law says someone who is "obstinately persevering in manifest grave sin" should not be admitted to Communion.

Catholic politicians who support abortion rights "have, in fact, contributed in a significant way to the consolidation of a culture of death in the United States, in which procured abortion is simply a fact of daily life," Burke wrote.

President Biden has long cast his faith as a cornerstone of his identity, writing in his 2007 memoir "Promises to Keep" that Catholicism gave him a sense "of self, of family, of community, of the wider world." He admits to becoming angry with God after the death of his first wife and baby daughter in a 1972 traffic accident, but President Biden said he never doubted God's existence.

He told The Christian Science Monitor in 2007 that he believes his faith is universal enough to accept those with differing viewpoints.