Prepare The Megazord! The 'Power Rangers' Cast Is Complete 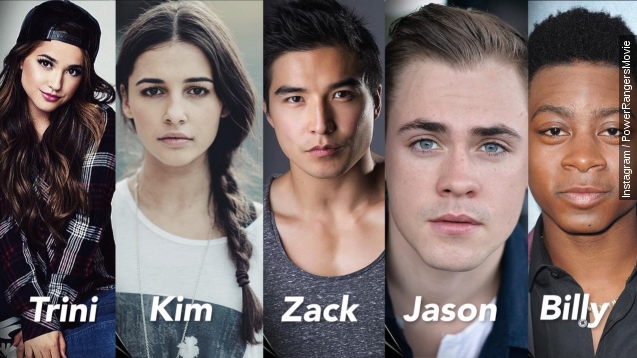 SMS
Prepare The Megazord! The 'Power Rangers' Cast Is Complete

By Eugene Daniels
October 31, 2015
Here is everything confirmed for the new "Power Rangers" movie. It's not much, but we'll take what we can get!
SHOW TRANSCRIPT

Fellow '90s babies, get excited or get ready to be really pissed off  –– we now know who is filling the white boots of our favorite butt-kicking teens. (Video via Saban Brands / 'Mighty Morphin Power Rangers')

"Recruit a team of teenagers with attitude," Zordon says in the show's pilot.

And it looks like Lionsgate took Zordon's advice; the company announced Friday singer Becky G would be morphing into the yellow ranger for the upcoming Power Rangers film. She rounds out a very diverse cast of seemingly newcomers. And if you're a fan of the original series, you'll love to hear the cast is keeping the original names we love despite those rumors otherwise. (Video via Saban Brands / 'Mighty Morphin Power Rangers',RCA Records / Becky G.)

So not much else has been confirmed but hints have been dropped about what kind of reboot we're talking here. All signs point to a movie that fans of the old series — who are probably at least in their 20s by now — will enjoy. (Video via Saban Brands / 'Mighty Morphin Power Rangers')

When asked about the tone, director Dean Israelite said the script is contemporary, telling IGN, it's a "mature but still playful ... fun take on the material." And with Marvel movies showing that the "fun but for adults" take on a popular series can make longtime fans and new ones shell out some serious money, "Power Rangers" could be aiming for that kind of feel. (Video via Walt Disney Studios / 'Avengers: Age of Ultron')

If the series has proven anything, it's that it has serious staying power no matter what generation is the primary demographic. The original series started airing in 1993 and since then has gone from Earth to space and everything in between. (Video via Saban Brands / 'Mighty Morphin Power Rangers')

The reboot starts filming in January and is slated to hit theaters in 2017. And as long as they bring back these two, we'll be there.  (Video via Saban Brands / 'Mighty Morphin Power Rangers')

This video includes images from Getty Images and Instagram / PowerRangersMovie .