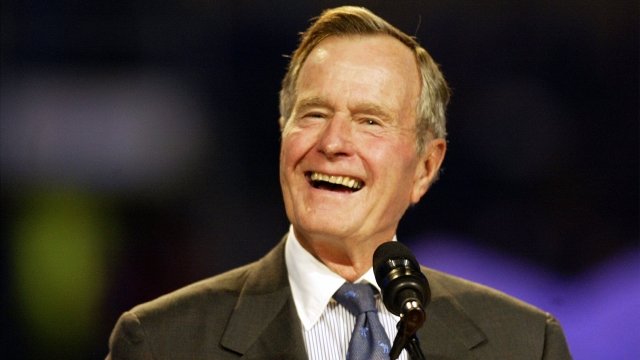 Politicians, celebrities and all five remaining presidents expressed their condolences on Saturday for the loss of former President George H.W. Bush.

His son former President George W. Bush announced his father's death in a statement Friday night, saying "George H. W. Bush was a man of the highest character and the best dad a son or daughter could ask for."

President Donald Trump tweeted: "Whenever I was with him I saw his absolute joy for life and true pride in his family. His accomplishments were great from beginning to end." Trump also declared December 5 a national day of mourning for the senior President Bush.

Former President Barack Obama said in a statement: "George H.W. Bush’s life is a testament to the notion that public service is a noble, joyous calling. And he did tremendous good along the journey."

Supreme Court Justice Clarence Thomas said he was honored to be nominated by the 41st president. Thomas added, "Both he and Mrs. Bush were the essence of decency and kindness then and throughout the years.”

Members of Congress from both parties expressed their condolences. Everyone from Mitch McConnell to Nancy Pelosi showed their appreciation for Bush's service with statements that flooded social media.

The Dalai Lama wrote to Bush Jr.: "While nothing can replace the loss of a father, we can rejoice in the fact that his was a meaningful life, dedicated to public service. I commend your parents for encouraging their children, including you my dear friend, to devote yourselves to the service of others."