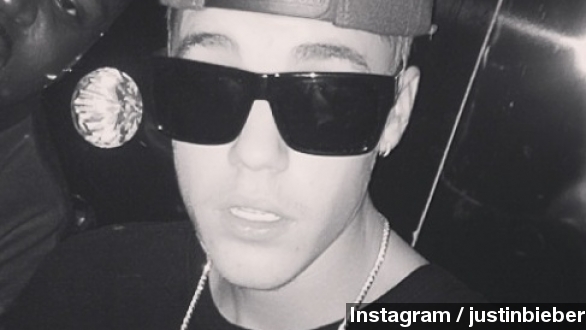 Justin Bieber's problems with the police just got very real. They raided his home Tuesday, and a drug arrest reportedly came out of the raid.

The Los Angeles County sheriff's department entered his southern California mansion in search of evidence, according to a spokesperson. (Via TIME)

TMZ has been all over the story, and is reporting that Bieber's friend, rapper Lil Za, was arrested for felony drug possession as a result of the raid. The drug was reportedly cocaine. (Via TMZ)

That same spokesperson told the New York Daily News the raid was in regards to a "felony vandalism investigation."

Apparently Bieber was at his home and was served with a search warrant. It's all to do with an alleged egg-throwing incident. Yeah. So, the reports are making for some pretty funny reading.

TMZ writes, "Sources say cops will look for anything that is relevant to the egg incident, including other eggs in the house ..."

Yes, this has led to headlines like "egg-throwing probe," but, police are also looking for possible video evidence, and this case could lead to prison time for the 19-year-old pop superstar. (Via CNN)

It all stems from an incident last Thursday night, when Bieber allegedly threw eggs at his neighbor's house and got involved in a verbal altercation with him.

And this could be a felony case if the eggs caused enough in damages. According to some reports, the neighbor is claiming as much as $20,000 worth of damage because of the Venetian plaster and stained wood exterior on his home. (Via Fox News, Island Def Jam Music Group / Justin Bieber)

Authorities maintain their level of involvement is not to do with Bieber being a celebrity — that they're simply investigating the case. There were reportedly about a dozen police cars at Bieber's house Tuesday.

This is the latest in a series of headline-making incidents for Bieber over the past year, including many having to do with his neighborhood. Neighbors have accused him of driving too fast and hosting loud, crazy parties. (Via The Huffington Post, Rolling Stone, SheKnows)

As for the egg-throwing case, Bieber's neighbor, who is still unnamed, told E! news the attack was unprovoked.

Bieber and his camp have yet to respond.

Though in a November Hollywood Reporter cover story he said he didn't care about "the haters."