Pippa Middleton Is Engaged (Or Is She?) 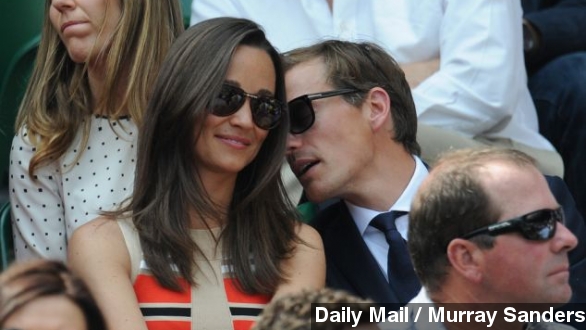 SMS
Pippa Middleton Is Engaged (Or Is She?)

By Jamal Andress
December 18, 2013
Reports are varying as to whether Pippa Middleton's boyfriend popped the question.
SHOW TRANSCRIPT

Her introduction to the world came in a stunning white dress during the royal wedding, and it seems we may get to see Pippa Middleton don a new white gown during her own walk down the aisle.

That's according to Us Weekly, who exclusively reported Pippa Middleton and the notably not royal Nico Jackson are engaged. Us Weekly writes its source called the proposal "Very romantic and grand!"

But before you get too excited about a wedding for Kate's little sis, there's this headline from the Daily Mail.

About an hour after Us Weekly's headline hit, the Daily Mail completely dismissed the claim writing, "As news of an engagement today circulated, a source close to Pippa Middleton says her boyfriend, banker Nico Jackson, 36, has NOT proposed."

Rumors of the couple getting hitched have been flying since September, but no official confirmation on any engagement news yet. (Via ABC)

The couple has been together for 15 months, with the relationship first becoming public when pictures of the pair on a Middleton family vacation surfaced in February. (Via New York Daily News)

According to UsWeekly's story, 30-year-old Middleton and 36-year-old Jackson, who is a banker, will wed in 2014. We'll just have to wait and see.