Pilots And Flight Attendants Have Higher Risk Of Melanoma 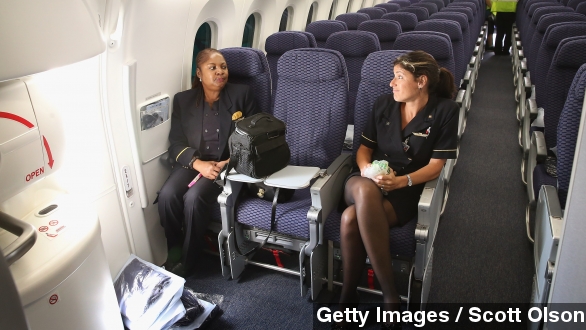 SMS
Pilots And Flight Attendants Have Higher Risk Of Melanoma

High-flying jobs such as flight attendant and pilot come with higher risk of melanoma — about double, in fact, according to a recent study that looked at years of research.

The analysis, published in the Journal of the American Medical Association, looked at a number of studies that examined the incidence of melanoma among pilots and said they are "exposed to higher levels of cosmic and UV radiation than the general population."

As you can imagine, if you're routinely flying on top of the clouds, you're going to get a little more sunlight than most people.

One of the big points was what kind of radiation plane windows block, with both glass and plastic blocking more than 99 percent of UVB radiation but with glass only blocking 54 percent of UVA radiation.

And that's particularly dangerous, as The Skin Cancer Foundation explains, because UVA light penetrates much deeper into the skin and can cause imperfections — which in turn can lead to skin cancer.

And that has many outlets saying things like this:

WBOC: "People who make a living while flying are thought to have a greater risk of melanoma because of increased UV exposure at high altitudes."

Still, it's not immediately clear whether that increased exposure is the only cause of the melanoma risk, and there are some dissenting voices. (Video via KPHO)

And another melanoma researcher who talked to The Huffington Post questioned the diversity of the sample group, saying, "While the authors point out that the comparison population was primarily northern Europeans ... the possibility of variation in this important risk factor remains unknown and therefore does introduce a limitation on confidence of the conclusion."

The analysis looked at 19 studies, which covered more than 266,000 participants.