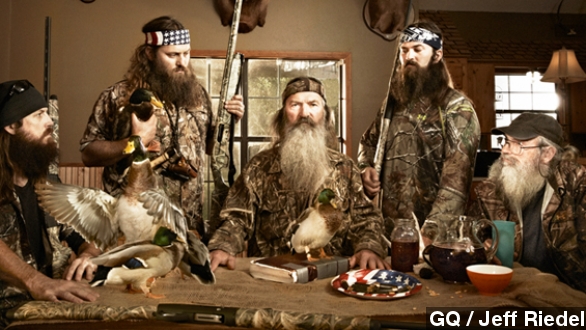 By Christian Bryant
December 18, 2013
A&E suspended the "Duck Dynasty" star after he made controversial comments about homosexuality during an interview with GQ Magazine.
SHOW TRANSCRIPT

The A&E network announced late Wednesday Phil Robertson would be on indefinite suspension from "Duck Dynasty" after making homophobic and, at times, graphic remarks in a GQ Magazine interview.

The network said in a statement, "We are extremely disappointed to have read Phil Robertson's comments in GQ, which are based on his own personal beliefs and are not reflected in the series Duck Dynasty." (Via The Hollywood Reporter)

Robertson grouped gays with terrorists and drunkards, adding that he was a Bible thumper and that sin was just not logical. (Via Us Weekly)

After the interview was published but before A&E announced his suspension, Robertson responded to critics, saying: "I would never treat anyone with disrespect just because they are different from me. We are all created by the Almighty and like Him, I love all of humanity." (Via People)

But it wasn't just Robertson's remarks on homosexuality that got him some attention. He also suggested that black people were happier before the civil rights movement.

Reminiscing on growing up in Louisiana before civil rights, Robertson said of black people: "They're singing and happy. I never heard one of them, one black person, say, 'I tell you what: These doggone white people' — not a word! ... Pre-entitlement, pre-welfare, you say: Were they happy? They were godly; they were happy; no one was singing the blues." (Via E!)

A&E didn't say how long the 67-year-old Robertson would be suspended from the show, but Robertson has previously suggested he might not mind being out of the picture. (Via Fox News)

The Robertsons told Parade magazine in July that the show brought the family much closer. But when asked how much longer he planned to be on TV, Phil told the magazine: "Not long. But I think it’ll go on without me.”

"Duck Dynasty" is one of A&E's most popular shows, regularly pulling in close to 9 million viewers each week.