Phil Everly Of The Everly Brothers Dead At 74 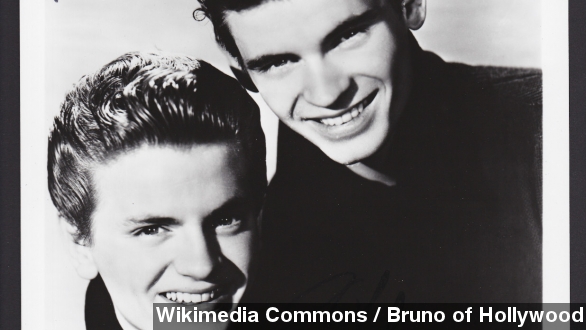 SMS
Phil Everly Of The Everly Brothers Dead At 74

By Briana Koeneman
January 4, 2014
Singer Phil Everly, one half of the influential rock duo the Everly Brothers, died Friday. He was 74 years old.
SHOW TRANSCRIPT

Singer Phil Everly, one half of the influential rock duo the Everly Brothers, died Friday. He was 74 years old.

According to his family, Everly died of complications from chronic obstructive pulmonary disease, which is a lung disease related to smoking. (Via BBC)

His wife, Patty, told the Los Angeles Times Everly's illness was the result of a lifetime of smoking cigarettes. "We are absolutely heartbroken... He fought long and hard."

And ITV reports his brother and musical partner, Don, is reportedly too devastated to speak to reporters.

The Everly Brothers first gained popularity in the late 1950s and 1960s with what CBS calls "...a high harmony that captured the yearning and angst of a nation of teenage baby boomers looking for a way to express themselves..."

Hits such as "Bye Bye Love," "Wake Up Little Susie" and "All I Have To Do Is Dream" helped the duo become international sensations. (Via YouTube / NRRArchives)

And they definitely left a mark on the music world as we know it today.

In fact, early in their career, the Beatles once called themselves "the English Everly Brothers." (Via Apple Corps Ltd. / The Beatles)

It's no wonder Rolling Stone has praised the group as "the most important vocal rock duo in history."

Phil Everly leaves behind a wife and four children.