Utility Company Could Be Charged With Murder In California Fire Deaths 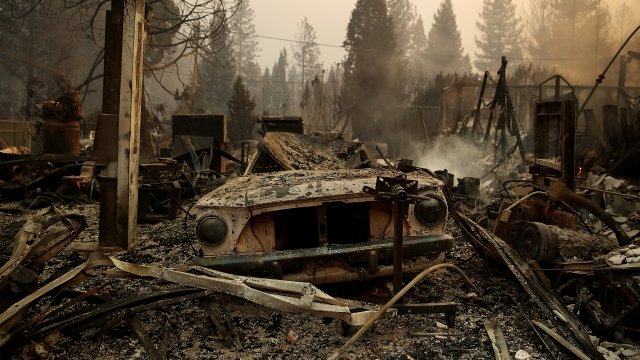 SMS
Utility Company Could Be Charged With Murder In California Fire Deaths
By Ethan Weston
By Ethan Weston
December 30, 2018
Cal Fire reportedly believes PG&E likely broke the law in connection with 12 fires last year and is looking into its potential role in the Camp Fire.
SHOW TRANSCRIPT

A California utility company could be charged with murder or lesser charges for its role in this year's Camp Fire and a number of wildfires in 2017, according to state Attorney General Xavier Becerra.

According to The Sacramento Bee, Becerra submitted his opinion on the subject to a federal judge overseeing a different case involving Pacific Gas & Electric Co., or PG&E.

Cal Fire believes the utility company likely broke the law in connection with 12 fires from 2017. That agency is also investigating PG&E for a possible role in the Camp Fire.

The Camp Fire was the deadliest in California history. It left 86 people dead and burned through over 18,000 buildings.

The Sacramento Bee reports Becerra's brief was just advisory and that if any charges were filed against PG&E, they would come from county district attorneys and not the state.